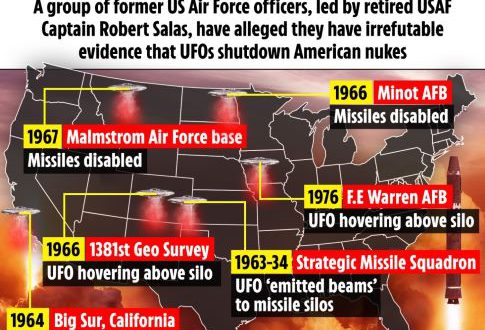 UFOs have reportedly tampered with nuclear bases and missile test facilities across the United States – and this is where the mysterious craft targeted, according to whistleblower military veterans.

The Sun Online has mapped the alleged extraterrestrial meddling with Earth’s doomsday weapons that apparently occurred during the height of the Cold War in the 1960s and 1970s.

The veterans are calling on the US Congress to investigate and hold public hearings into reports UFOs meddled with, or knocked out, nuclear weapons at their hidden underground launch sites.

All the alleged witnesses claim they were gagged after their astonishing UFO experiences.

One of them was former US Air Force captain Robert Salas.

He was the on-duty commander of an underground launch control facility assigned to Malmstrom Air Force Base, Montana, US on March 24, 1967.

He claims all ten of his intercontinental ballistic missiles became inoperable.

Speaking yesterday at a press conference at Washington DC’s National Press Club in Washington DC, Captain Salas said: “In the coming days and months, I think we will all have to deal with this reality — because there is abundant and sober evidence, past and present for the reality of unidentified aerial phenomena (UAP).”

Captain Salas added: “It is undeniable. It is not swamp gas, or any other quirk of nature.

“Indeed, the evidence that there is some intelligence and intent behind the UAP has been established by the testimonies we have presented, and many more which have yet to be presented.

“The question is whether can we finally get the court and public opinion to give it the attention it deserves.”

Perhaps the most startling alleged UFO incident unfolded in 1964 at the edge of space above the Big Sur California.

Giving his testimony, he said: “I was part of a US Airforce cover-up. It was shaped like a flying saucer and was firing a beam of light at our warhead.

“Then it flew out of the frame the same way it had come in. At that point, the warhead tumbled out of space.”

Former Air Force officer, Robert Salas, was the on-duty commander of an underground launch control facility assigned to Malmstrom Air Force Base, Montana, US on March 24, 1967.

He claims all ten of his intercontinental ballistic missiles became inoperable.

But Captain Salas said the simultaneous shutdown was an “impossible” occurrence because the ten nuclear Minuteman missiles were all running on independent systems.

The “attack” implied a level of sophistication that no human at the time possessed, he claims.

Captain Salas said: “I can only speculate as to why it happened. I think it was simply a message to all of us on Planet Earth that we need to rid ourselves of nuclear weapons.”

According to Deputy Missile Combat Crew Commander Jerome C Nelson during the winter of 1963/1964 UFOs emitted beams towards his missile silos at Walker Airforce Base in Roswell.

He said: “While I was on alert duty in the launch capsule at Atlas Site 9, west of Roswell, my topside security guard called me on the telephone and reported an extremely bright light — that is, a fully illuminated, round-shaped object — was hovering silently over the missile site and shining a spotlight down onto it.

“I could tell he was serious and his voice revealed he was frightened. After five minutes the object left the vicinity.”

He reported what he thought was possible sabotage but was fobbed off.

But during the next month or so it happened several times.

Two incidents were alleged to have happened here.

The first was in 1966. It was reported by USAF Airman Patrick McDonough who was surveying Minuteman I missile silos.

He said: “It appeared to have dim lights outlining the disc and white light emanating from the centre.

“It stayed there for approximately 20 to 30 seconds and, from a dead stop, sped off to the East at a tremendous speed. There was no noise or wind.”

The second was reported by Minuteman III ICBM launch officer Bruce Fenstermacher in 1976.

It stayed there for approximately 20 to 30 seconds and, from a dead stop, sped off to the East at a tremendous speed…there was no noise or wind.

One of the security guards he said had reported in an excited voice that they now saw a pulsating white “thing” in the sky.

They claimed to have seen flashing red and blue lights between the pulsations. The craft was close to the launch control facility, hovering 100 feet or so.

The UFO was said to have been shaped like a “fat cigar” and appeared to be about 50 to 60ft long.

He said: “Over the next couple of hours the pulsating light made stops very close to several more missile sites.

“Each time it moved to a new missile. I tried to send a Security Alert Team (SAT) to the site in question.

“Each time they responded that they were having car problems and other equipment problems.”

Sometime around 4.30 am the UFO “whooshed away” and turned into a white dot within a few seconds. Then it totally disappeared, it was claimed.

A former nuclear missile base boss, who later went on to develop backpacks for NASA Apollo astronauts, claimed a UFO crippled ten of his nukes in their silos.

Retired Air Force Captain David D Schindele alleged the bizarre incident unfolded in 1966, while he was a missile launch crew commander in the Minot Air Force Base missile field in North Dakota.

He said: “I estimated the object to be 80 to 100ft wide. After many minutes passed the object then glided to the north end of the building and out of sight.

“But it then became visible to security guards in the control section of the building.”

Meanwhile, the scared-witless base guards viewed the object through the security centre window.

Captain Schindele said: “It was a short period of time before the object took flight and disappeared within a second.

“They all confirmed to us a terrifying experience to behold, which  I could tell by the tone of their voice and expressions on their faces.

“They knew the object was not a helicopter. Base choppers did not fly at night, especially without notice to the facility.”

Following the press conference, the retired nuke base bosses are now hopeful the military is edging towards disclosure.

A crucial development towards this came in June when the Pentagon released its UAP Task Force report which revealed 144 unexplained UFO encounters.

Charles Igbinidu is a Public Relations practitioner in Lagos, Nigeria
@https://twitter.com/ionigeria
Previous WATCH: ‘World’s biggest snake’ so massive it has to be lifted by CRANE from bush lair
Next Champions League: Man Utd pull off stunning turnaround, Chelsea coast to victory