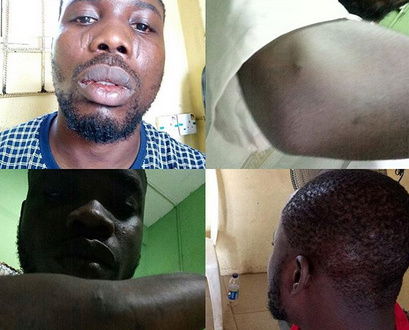 Radio Lagos/ Eko FM Staff, Damilare Olalekan popularly known as Ajikawo and his siblings were assaulted by men of the Special Anti-Robbery Squad of the Divisional Headquarters, Ikotun Egbe, on Sunday 14 January, 2018.

According to Ajikawo, it seemed like an event where hoodlum attack you at gunpoint. He sustained injuries to his head after being hit with a gun butt. He also had bruises due to being handcuffed.

Speaking on the incident, he said: “My siblings and I were assaulted right in front of our house at 1:20PM. They actually attacked my siblings because they wanted to know why I was being physically harassed.

I will press charges through my lawyers as I’ve kept a few pictures to show what was done and a few well to do citizens have witnessed my ordeal. I wondered what would have happened if it was just a humble guy with no one to call.

This is disgusting that I was beaten by the same policemen whose salary I pay through my tax. I urge the Lagos Police command to investigate this matter as I’ve informed crime reporters about it too.

Previous 7-yr-old with Girl Abducted, Brutally Raped And Murdered
Next Detroit Man Deported To Mexico After 30 Years In US