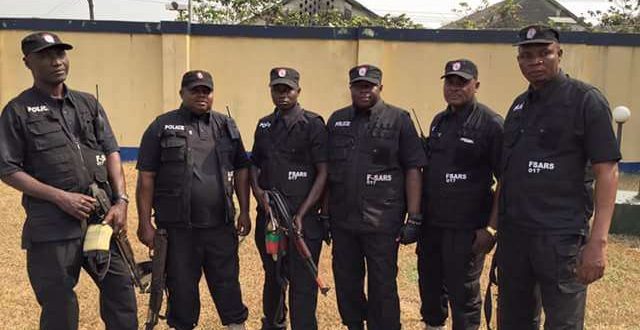 When the wife of Kazeem Akeem, a ticket officer at New Market, in the Ijebu Ode area of Ogun State, gives birth anytime from November 2018, the baby will be without a father.

Akeem, aka Oba Olofin, was allegedly tortured to death by men of the Special Anti-Robbery Squad (SARS). What happened?

He was allegedly arrested with some gamblers by SARS Men from Ogun State Police Command.

But the state police command accused the 32-year-old of robbery, adding that he took ill in custody and died at a hospital.

The Punch learnt that Akeem was an executive member of a tricycle riders’ association operating around the market and was in charge of issuing tickets to the riders.

It was gathered that a man had staked his money and phone at a gambling joint in the market on March 31, 2018, in anticipation to win an expensive phone.

After he lost out to the bet operator at the joint close to where Akeem operated, he was said to have approached the deceased to assist in the return of his valuables – a request Akeem reportedly declined.

The loser was said to have left in anger and returned after some minutes with some SARS operatives, who picked up the gamblers and Akeem.

A friend of the deceased, who gave his name only as Damilare, told Punch that the operatives initially detained the suspects at a police station around the market.

He said an executive member of the tricycle riders’ association, who gave the tickets to Akeem, went to the station in the evening only to be told that they had been transferred to the SARS’ office in Abeokuta.

Damilare said, “Oba Olofin (Akeem) issued tickets to tricycle riders at New Market, Ijebu Ode. A man went to place a bet at a gambling joint in the market around 11am that day and he lost. He then brought SARS operatives to arrest five gamblers and Oba Olofin because he did not help him to beg for the recovery of the money and phone he lost in the bet.

“Oba Olofin’s boss, Abbey, followed the SARS men to the police station around the market to secure his bail. A policeman told him that it was a minor case and that he would be released before the end of that day. When Abbey went back in the evening, he was told that they had been taken to Abeokuta.

“The following Tuesday, the police charged the suspects with robbery in a court at Ijebu Ode, but Oba Olofin was not there. When the charges were read to them, they exclaimed that they were not robbers. The police told the court that the sixth person (Akeem) was dead. We were shocked.”

Damilare said after the arraignment, he and a lawyer on April 7, visited a prison in Ijebu Ode, where the defendants were remanded.

He said one of the accused, identified only as Rotimi, stated that Akeem died from torture in SARS custody and that they were allegedly framed.

He said, “According to Rotimi, Oba Olofin was kept in a separate cell. He said one evening, Oba Olofin cried as he was being tortured by policemen and that around 7pm, he was brought outside and he could not talk. About an hour later, he started foaming in the mouth. Rotimi said he called the policemen, but they did not answer and that it was in the early hours of the following day they came to carry his corpse. He said when he later asked about Oba Olofin from one of the policemen, he was told that he was receiving treatment in a hospital

“Rotimi said they were paraded with phones while their picture was taken and that some minutes afterwards, the policemen said the picture was not clear and brought them out again. He said the SARS officials put guns in front of them and took their photographs, adding that they were beaten up when they protested.”

A relative of the deceased, Sofiu Lawal, said the family had wanted to take the police up on the alleged killing, but rescinded the decision after they were told that they could not “win a case against government.”

“We believe that the SARS men deliberately killed him; but people advised us that we should collect his corpse and let go because we cannot get justice. His corpse had been released; he was buried two days ago,” he added.

The widow, 30-year-old Iyabo, said it was painful that she would give birth to a baby without a father, lamenting that Akeem’s death was a big blow to the family.

She said, “I have accepted my fate. My husband issued tickets; he was not a robber. I want justice. I am just two months’ pregnant.”

However, the Ogun State Police Public Relations Officer, ASP Abimbola Oyeyemi, said Akeem and others were arrested for robbery, adding that they allegedly confessed to the crime.

While denying that the victim was tortured to death, he said the deceased took ill in police custody and was taken to a hospital where he died.

He said, “The man (Akeem) was an armed robber. We have a complainant. He robbed somebody of his phones and other items. The items they stole and guns were recovered from him and his gang members. They made confessional statements.

“While they were in detention, he fell ill and he was taken to the hospital. He gave up the ghost in the hospital. He was given the best attention at the hospital and we have evidence to show that he was actually taken to the hospital for treatment. Whoever said he was tortured was lying. If somebody has made a confessional statement, what else would he be tortured for? The police of nowadays have gone far beyond torturing somebody to extract statements from them and the Commissioner of Police frowns on that. The suspects have been charged to court.”