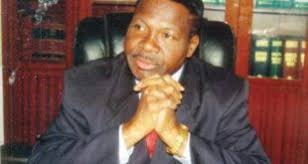 Ozekhome also mocked the Economic and Financial Crimes Commission which was the key witness against Saraki.

He said the ruling by the tribunal was evidence that the anti-corruption was nothing but a ruse to fool the feeble-minded.

In a statement on Wednesday, Ozekhome said, “The Code of conduct tribunal headed by Mr Danladi Umar (not Justice Umar,as always erroneously reported ),was bold,courageous and right, in spite of visible executive interference and manipulation, to have discharged and acquitted Senate President, Dr. Bukola Saraki, on all the counts of false declaration of assets levelled against him.

“EFCC, much trumpeted much-trumpeted media trial of cases, dramatic hype and conviction of suspects on the pages of newspapers and social media, leading the country to now?

“PACAC, where has your bare knuckles, warped and puerile ‘legal advice’ to the vindictive Executuve to denigrate and humiliate otherwise innocent opponents and opposition of government led it to?

“You have actually done more harm and damage to the so called anti -corruption ‘war’ than all the vampires and barbaric, primitive accumulators of our national wealth and common patrimony joined together.”

Ozekhome said the performance of government prosecutors in court is reminiscent of television comedy programme, ‘Fuji House of Commotion’

He said the government should get serious instead of disgracing itself every time.

Ozekhome added, “Through your unresearched and myopic stance, the government has serially lost cases. Rather than put your ‘Fuji House of Commotion’ in order, you always shamelessly declare that “corruption is fighting back” and that the courts are against the anti corruption fight, as if the courts owe the executive a sacred duty and obligation to help it trample on citizens’rights and win badly prepared and lousily prosecuted cases at all cost.

“What we saw from the EFCC stable as usual, was the usual Baba Sala’ Alawada Kerikeri’s Odeon histrionics and sensational media hype of Saraki receiving humongous pension from Kwara State government, whilst simultaneously receiving a salary from NASS; of Saraki taking loans to buy many properties; of Saraki owning many assets, etc.

“How did these prove specific declaration of assets? No attempt was made by the EFCC to prove the essential ingredients of false declaration.I was laughing.I am still laughing. Corruption, a very corrosive and ravaging cancer that has virtually destroyed the weak fabric of our society cannot be defeated outside observance of the rule of law and by trampling on citizens’ rights and cherished freedoms.”

Previous Code Of Conduct Discharges Saraki Of All Allegations
Next I Gave Judge N750, 000 As `Assistance’ Not Bribe–SAN