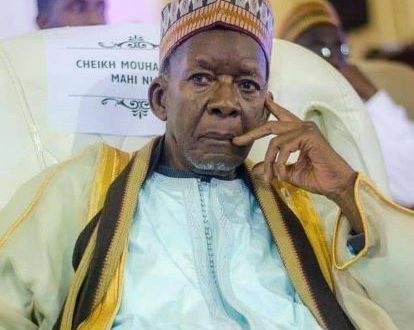 According to Daily Trust the younger brother of the leader, Sheikh Makey Nyass, was reported to have made the appointment public during one of their the sect’s activities for the just-concluded Sheikh Ibrahim Nyass Maulud in Sokoto.

Makey was quoted to have referred to Emir Sanusi II as following the footsteps of his late grandfather, late Emir of Kano, Muhammadu Sanusi I who was deposed by the government and later on appointed leader of the Sect in Africa by his father, Sheikh Ibrahim Nyass.

However, the Grand leader, who spoke to newsmen in Arabic on Sunday, explained that the installation of Nigeria and African Leadership of Dhariqa Tijjaniyya (Calipha) was an activity that must be scrutinized after nomination from scholars in both Nigeria and Senegal.

”Such decisions have to be discussed at different fora, consensus must be reached before the formal announcement.

”After this, a letter of credence endorsed by a group of scholars, duly signed and stamped by grand world leader would now be presented to the person appointed.

“In his case (Emir Sanusi II), such modalities were not followed nor has he presented himself or indicated any interest on the seat of African leadership of Dhariqa Tijjaniyya,” he said

According to him, unity of followers was paramount and enjoined adherents to dedicate themselves in true worship, foster brotherhood and love among them.

Also speaking, one of the sons of Sheikh Dahiru Usman Bauchi,  Ibrahim Dahiru, insisted that Sheikh Makey Nyass was quoted out of context.

Ibrahim described the purported appointment of former Emir of Kano, Sanusi II as an act of mischief-makers.

Daily Trust reported that the sect members converged on  Sokoto from March 11th to March 13th 2021 to celebrate Nyass.