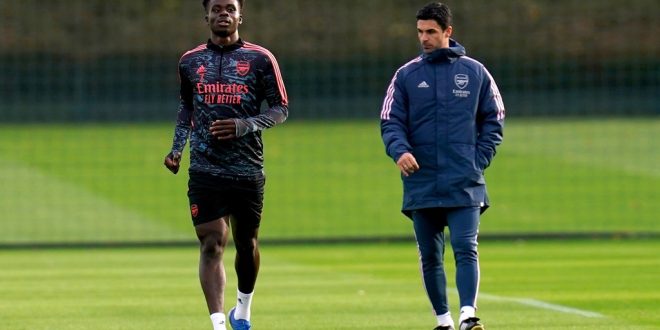 Saka back in Arsenal training after injury scare

Bukayo Saka is back in Arsenal training and appears to be unscathed after his injury scare last weekend.

The 21-year-old limped out in the first-half of Arsenal’s 5-0 win at the weekend but has joined in with the Gunners’ preparations for their final Europa League group stage match with FC Zurich.

Saka’s return to training will be a big boost to England manager Gareth Southgate, with just over two weeks to go until the World Cup starts in Qatar.

Charles Igbinidu is a Public Relations practitioner in Lagos, Nigeria
@https://twitter.com/ionigeria
Previous Elon Musk suggests Donald Trump and other banned people won’t be allowed back on Twitter for weeks
Next China video mistaken for drowning of Davido’s son