Home / News / Local News / Sagay Blasts Fayose: He Is An Irresponsible Clown, An Embarrassment To Nigeria 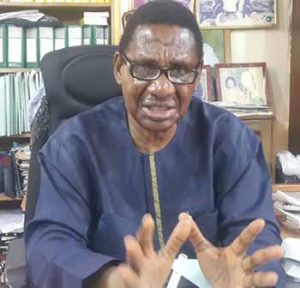 Sagay Blasts Fayose: He Is An Irresponsible Clown, An Embarrassment To Nigeria

The Chairman of the Presidential Advisory Committee Against Corruption, PACAC, Prof. Itse Sagay, has described the Ekiti State Governor, Ayodele Fayose as an irresponsible clown.

He made the claim while reacting to Fayose’s recent threat to release damaging photographs of President Muhammadu Buhari to prove that he is critically ill in London.

Fayose, while addressing reporters had said, “If they go further and try to continue to deceive Nigerians, I will release about 11 damaging pictures anytime from now on the President’s health.”

But, Sagay in his reaction to the statement cautioned the Chairman of the Peoples Democratic Party, PDP, Governors Forum against his comments, saying he embarrasses himself and his position each time he speaks.

Sagay said, “Fayose is an irresponsible clown. Given his age and position, he is an embarrassment to this country. Each time he opens his mouth, he reduces his non-existent esteem”.

“He does have any esteem, so whenever he talks, he just reduces himself to nothingness. So, he is talking rubbish and should be ignored. I believe he has been ignored at the federal level. Let that continue.”

This is coming at a time the Imo State Governor, Rochas Okorocha revealed that the President may return to Nigeria in two weeks’ time.

After initially spending over 50 days on medical vacation in London, the President had in May returned to the United Kingdom, UK, for follow-up medical check-up and is yet to return.

Previous Court Frees Joachim Iroko, Man Who Named His Dog After Buhari,
Next Nigerians Try To Stop Indian Police From Arresting Compatriot Who Posed As MD Of Ford Motors To Dupe Woman He Met On Matrimonial Site