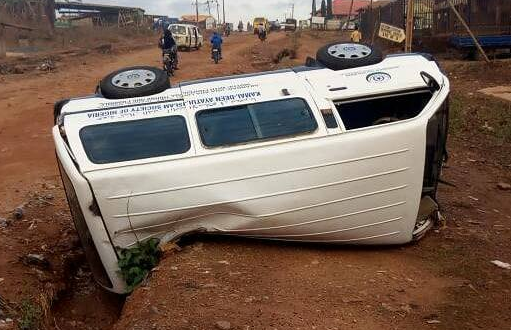 The Federal Road Safety Commission (FRSC) in Ogun has confirmed that two people died on Tuesday when a commercial bus somersaulted on the Lagos-Ibadan expressway.

The FRSC Sector Commander, Clement Oladele said the accident occurred at about 5 pm at Lamona Park on the expressway. He said the Volkswagen commercial bus marked LSR 971 XG had 28 passengers, including 16 females and 12 males as well as three children, on board.

According to him, the accident was caused by a tyre burst which resulted in the vehicle somersaulting. “Two people died in the accident and their corpses have been deposited at Isara mortuary while the injured were taken to Isara Hospital, Ogere,’’ he said.

He advised motorists to obey traffic regulations and follow instructions from FRSC patrol teams and other sister traffic agencies.