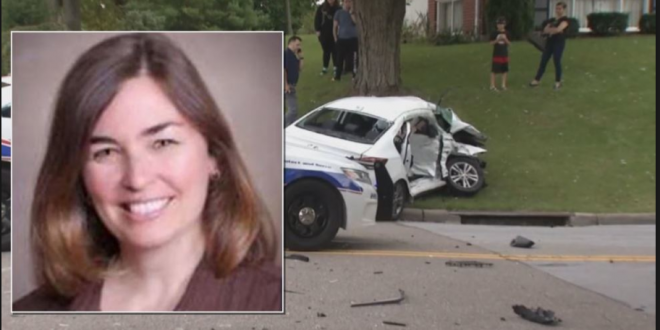 Sad! Mother of 5 Killed In Auto Crash As Police Chased A Thief

Mary Taulbee, 57, a longtime Ohio real estate agent and mother of five was killed on Tuesday after her car crashed and spun into the path of an oncoming police cruiser that was chasing a stolen Jeep.

She was rushed to the hospital and pronounced dead following the back-to-back crashes near the intersection of Ohio 741 and Carnation Drive, Cincinnati Enquirer reported.

The series of events on Tuesday night began when Moraine police received a call about a stolen Jeep in Harrison Township, near Dayton, Sgt. John Spencer told the Cincinnati Enquirer. Police attempted to pull over the driver of the Jeep traveling south on Ohio 741 when it began speeding away. A police chase ensued that led them near the intersection where Taulbee’s car had just crashed into a Chrysler 300.

Taulbee’s car spun into the other lane upon impact. A police cruiser then slammed into Taulbee’s car. She died from injuries caused by the crash. “Mary would not be dead if the police car were not traveling at 80 miles per hour,” said Steven Brown, president of Irongate Realtors, where Taulbee worked for 22 years.

The driver of the Jeep, Alyssa Irwin-Debraux, 18, was arrested after she crashed into another vehicle about a mile and half away, officials said. Ohio State Highway Patrol is investigating the crashes to determine what caused the sequence of events.

It’s unclear how Taulbee collided with the Chrysler 300, an event which was unrelated to the police chase. Brown said Taulbee was going to meet with a client the night she died. “You can replace a car. You can’t replace Mary’s life,” Brown said. “She was very highly respected, not only in our company but in our industry. For her, every deal was personal.”

Along with her five children, Taulbee is survived by her husband of 28 years and six grandchildren.