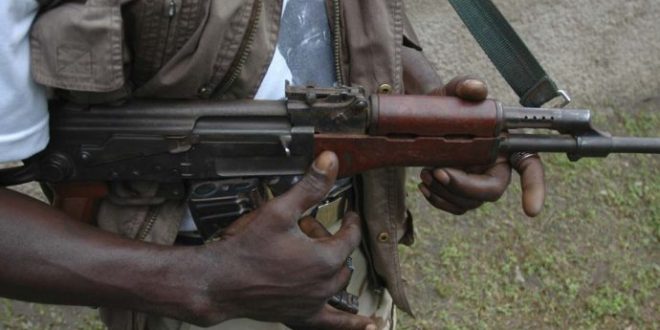 A 64-year-old man, identified as Gabriel Fasoyin has been arrested by the Ondo State Police Command for allegedly shooting his grandson, Seun Fasoyin.

The  incident occured at Agric Settlement in Ile Oluji, the headquarters of the Ile Oluji/ Oke Igbo Local Government Area of Ondo State on Wednesday,

According to a source,  the suspect committed the offence after he had drunk alcohol on the fateful day, adding that he ( suspect) was fond of getting drunk.

The source said, “The man was fond of drinking too much alcohol and his family members were not happy with the habit because he always messed himself up whenever he drank. At times he would drink and get unconscious, urinating all over his body.

“The family members were not happy with his drinking habit and they have made several efforts to change him without success.

” On that day, he was drunk as usual, so in order not to embarrass the family again, he was locked up in a room so that he could sleep but he did not. As Seun (the deceased),  his grandson was trying to lock the room with a key, the man ( suspect) brought out a gun and shot the boy.”

When contacted, the state Police Public Relations Officer,  Mr. Femi Joseph, confirmed the incident and said the suspect had been arrested and currently in the police custody while an investigation was ongoing.

” I can confirm that the boy was shot by his grandfather, who is already with us. He was shot at a close range and died on the spot. We have commenced an investigation on the matter.” Joseph stated.

He added that the suspect would appear in court after the completion of the investigation. The remains of the deceased were said to have been deposited at an undisclosed morgue.