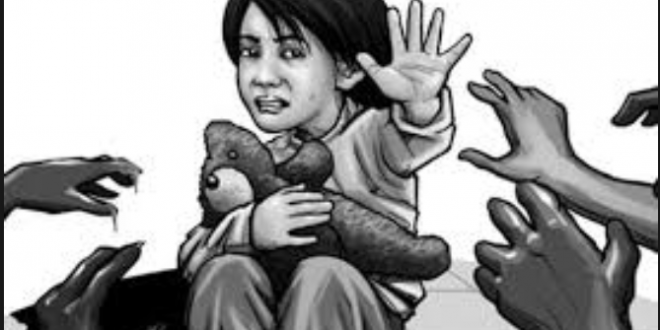 The lifeless body of a 3-yr old girl, Khadijah Abubakar Abdullahi, who was declared missing four days ago, was found inside an office at Khairat community school in Walalambe quarters, Nassarawa local government area of Kano state yesterday April 17th with blood stains around her vagina and anus, suggesting that she was raped to death by a yet-to-be identified culprit(s).

Khadijah and her friends had gone to the school to meet with her mother who is a teacher there.

Confirming the incident, the spokesperson of the state police public relations officer, SP Magaji Musa Majia, said nine suspects mostly teachers of the school, have been arrested in connection with the rape and murder.

Father of the deceased, Malam Abubakar Abdullahi popularly known as IBB, said he was shocked when he saw the lifeless body of his little girl in a pool of her own blood.

“The condition I found my daughter suggested that she was raped. Seeing her in that condition, we could not even touch the lifeless body. The body has started decomposing, causing an awful odour. We called the police who took the corpse for investigation and later released it to us for burial. Khadijah is dead, but I want justice to be done. It is Khadijah today, only God knows who will be the next target. There is a need for the authorities concern to do something on this inhumane act in order to safeguard the lives of our children.

Her mother is a teacher in the school where her lifeless body was found and late Khadijah and her siblings are students of the same school. On the fateful day she got missing, she was not accompanied to the school by her mother because she (the mother) was sick. After the school hours, Khadijah’s siblings came back home with the news that she was nowhere to be found after the closure of school around 5:30pm and that was the beginning of our travails,” he said