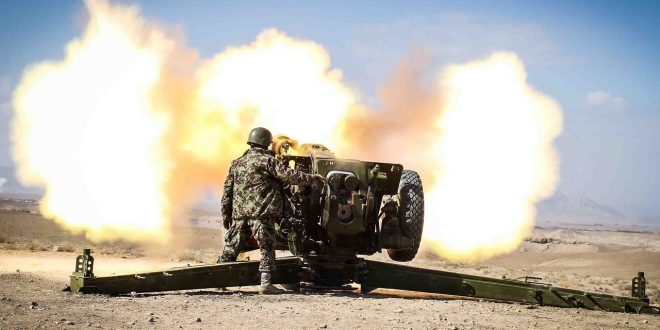 The General Staff of the Armed Forces of Ukraine has claimed to have sunk a Russian warship on the Dnipro River on Tuesday by artillery fire.

If confirmed, it would be the most recent Russian military vessel to be lost in the conflict and could be another setback for the Kremlin as it seeks to reverse its fortunes on the battlefield. Russian Army and proxy mercenary forces have nearly taken full control of the mining town of Soledar located near the city of Bakhmut in the Donetsk region.

“Ukrainian artillery has successfully shot a Russian war boat on the Dnipro River,” the Defense of Ukraine official Twitter account announced following the sinking of the military watercraft.

According to The New Voice of Ukraine, it was a Russian cutter that was destroyed on the Dnipro River in the Kherson Oblast. The small military vessel was wrecked near Bilohrudyi Island after coming under fire from Ukrainian forces.

“The vessel was hit with artillery,” said the spokesperson for the Ukrainian military Yevehen Yerin. It is unknown if any of the crew survived, or what type of artillery was employed – but there is speculation it may have been targeted by a U.S.-made HIMARS.

As of last fall, the Russian Navy’s Black Sea Fleet had seen at least a dozen of its warships and military rivercraft sunk or badly damaged – about 15 percent of its total force, which reportedly consisted of 74 combat units before the Kremlin launched its unprovoked invasion last February.

That included the flagship of the Black Sea Fleet, the cruiser Moskva, which was sunk by Ukrainian forces last spring using the indigenously developed Neptune missile. The sinking of the cruiser – the largest warship to be lost in combat since the Second World War – has become a symbol of pride and resistance to the Ukrainian people, and it was even commemorated on a postage stamp.

Despite the losses, Russia does maintain control of the waters around Ukraine, as Kyiv’s small naval force is now essentially non-existent. The Ukrainian Navy was forced to scuttle its flagship frigate, Hetman Sahaidachny, in the early weeks of the conflict to prevent its capture by Russian forces.

In addition, a U.S.-built patrol boat that had been transferred from the U.S. Coast Guard to the Ukrainian Navy – and renamed the Sloviansk – as part of efforts to build up the country’s fleet was also among the early casualties.

Last fall, it was announced that Ukraine would be provided with six U.S. Navy “40 Defiant” patrol boats. The 40-foot (12.2 meters) long craft, built by Metal Sharks in Franklin, Louisiana, had been selected by the U.S. Navy in 2017 to replace the existing Coastal Riverine Force (CRF) boats. The small vessels are powered by two Cummins QSB 6.7 diesel engines, driving twin water jets, which enable them to reach speeds of up to 40 knots. The welded aluminum monohull of the boats is equipped with ballistic protection to increase combat survivability.

In U.S. Navy service, the 40 PB can be equipped with remote-operated weapons stations, while Naval News reported that in Ukrainian service they could employ crew-operated weapons – including twin M2 .50 caliber Browning heavy machine guns, an Mk.19 automatic grenade launcher, and an M240 7.56mm medium machine gun. Each of these weapons could be rapidly switched to other pedestal-mounted systems.

Though not large engage the Russian Navy’s warships, such vessels could be used to conduct raids along the coast and to help maintain control of rivers such as the Dnipro – which now has one fewer Russian watercraft on patrol.