Bato Basanov, at the front, with two of his tank comrades (Image: social media/e2w)

A ‘hero’ Russian world champion in an international tank warfare competition was killed when he was sent by Vladimir Putin into a real battle in Ukraine.

Bato Basanov, 25, from Buryatia, was in a record-breaking tank biathlon team that performed last year in war games in front of defence minister Sergei Shoigu and chief of the army general staff Valery Gerasimov.

But his conflict ended in death when his tank was hit in Ukraine.

He is the latest of dozens of men from his impoverished region some 3,500 miles east of Moscow to be killed in Putin’s war.

As two bereft mothers in grief-stricken Buryatia spoke about collecting the bodies of their sons, one reportedly said to the other: ‘You’re lucky because your son’s body arrived intact. Mine came back as a head and two hands.’

Basanov, a corporal, had been hailed last year for ‘glorifying Russia by becoming a world champion in tank biathlon as part of his team’. 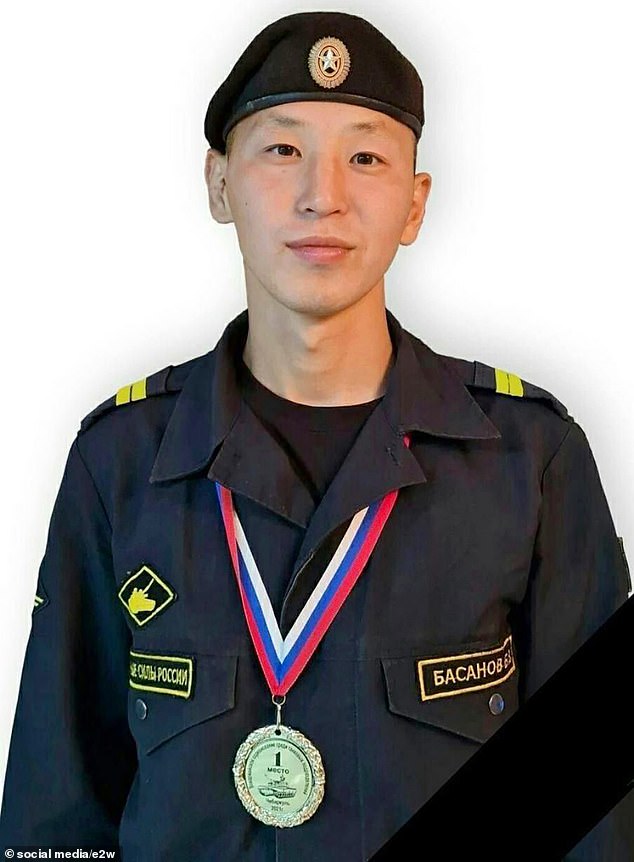 Bato Basanov, 25, winner of World Tank Biathlon-2021, was killed whilst serving in a tank in Ukraine. Basanov, a corporal, had been hailed last year for ‘glorifying Russia by becoming a world champion in tank biathlon as part of his team‘ 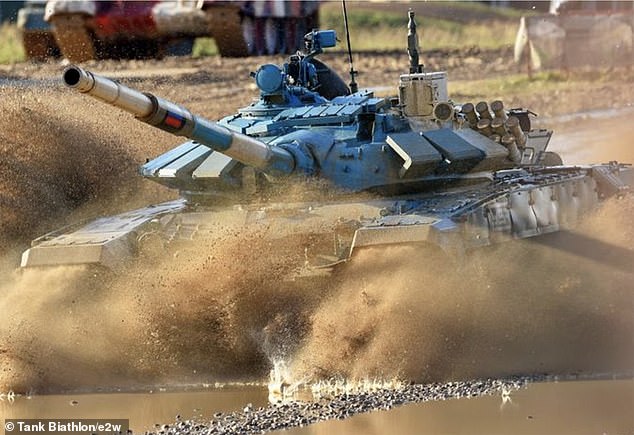 2021 World Tank Biathlon in Alabino, which was held in the Moscow region. Basanov competed against and beat teams from 198 other countries including China

Uniquely, he shot without missing a single target at speeds of up to 50mph at the Alabino training ground in Moscow region.

Yet as a report from Volya Media said: ‘The death of Bato Basanov is grim confirmation that tank biathlon and real war are completely different things.’

Basanov — whose Russian T-72B3 team beat soldiers from 19 countries in combat games including China — was shown being presented to Gerasimov, now in charge of Putin’s flailing war effort.

Yet an anonymous Russian military expert has blamed Putin’s government for botched modernisation of tanks, leaving them worse in optics and targeting technology than Ukraine’s older tanks which were upgraded with Western equipment.

‘Combat training in [Russian] tank units is disgusting,’ he added.

The ‘shortcomings’ have led to Russia’s dismal performance in the war, he said.

Basanov was a gunner of the first company of the tank battalion of the 37th separate guards motorised rifle brigade of the Russian Air Defence Forces.

The body of the ‘hero’ took seven weeks to be retrieved and returned to his family for a funeral on Friday.

His friends and family said in a joint statement: ‘Bato was an open, responsive, very sociable man, a faithful comrade and friend, who was always ready to come to the rescue.

‘Cheerful, smiling and sincere, Bato has always been the pride of our family, a kind, honest, much-loved son.’

Russia suffers the loss of his 38th colonel

Meanwhile, Vladimir Putin has suffered the loss of his 38th colonel in the war in Ukraine as the Russian top brass toll worsens.

Lieutenant Colonel Fyodor Evgenievich Solovyov, 44, died in the Donbas, according to reports in his homeland.

His death was revealed as the Russian armed forces today rehearsed in Moscow for Monday’s vast military parade on Red Square marking the end of the Second World War.

Eight MiG-29 fighters flew past in a ‘Z’ formation – the insignia used by Putin’s military as a symbol of its military action in Ukraine.

Critics have likened it to the swastika used by German Nazis.

Solovyov was commander of the howitzer self-propelled artillery regiment of the 127 motorised rifle division.

He was buried with full military honours and a triple volley of guns in Chunaki village, Penza region.

A Russian report said: “He died as a hero on the territory of the Donetsk People’s Republic.”

Details were not given as to how he was killed but he was posthumously awarded Russia’s Order of Courage.

Nine generals and 38 colonels have been killed since 24 February in Putin’s war according to known statistics, although Russia has not come clean on total fatalities.

Reports have claimed that the US has offered intelligence to Ukraine to help target high ranking commanders, destroying morale in Russian forces.

Solovyov’s death was disclosed four days after the 37th known colonel to die in Ukraine – Lt-Col Eduard Dmitriev – was reported to have been killed.

Dmitriev, 44, a tank commander, was buried in his native Kirov region.