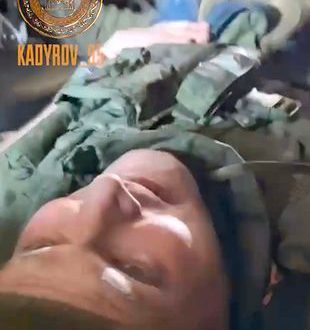 One of Vladimir Putin’s brigade commanders has been killed by one of his own troops, it has been reported.

A furious Russian soldier drove over Russian Colonel Yuri Medvedev with a military tank on the frontline in protest, it has been claimed.

Angered by heavy losses suffered by the unit, he is said to have taken his commander down in front of other horrified soldiers.

Western officials confirmed the Russian general was killed “as a consequence of the scale of losses that had been taken by his brigade”, it has been stated.

They added: “We believe that he was killed by his own troops deliberately.

“We believe that he was run over by his own troops.”

The man who was behind the wheel of the tank “blamed the commander of the group, Col. Yury Medvedev, for the deaths of his friends,” Ukrainian journalist Roman Tsimbalyuk said on Facebook last week

“Having waited for the right moment, during battle, he ran over the commander with a tank as he stood next to him, injuring both his legs,” he wrote on the social media platform.

“Now Col. Medvedev is in a hospital in Belarus, waiting for monetary compensation for combat wounds received during the ‘special military operation to protect the Donbass.’ Colonel Medvedev was awarded the Order of Courage.”

NATO yesterday estimated that up to 15,000 Russian soldiers have been killed in four weeks of war in Ukraine.

Two other service members were caught venting about Putin, it was said.

It has now been claimed he died following the attack by his fellow Russian soldier ( Image: social media / East2west News)

It is not known what happened to the soldier who has been accused of turning on his own colleagues.

It comes as Putin has allegedly resorted to extreme measures to combat his troops’ low morale.

The Kremlin is reportedly sending execution squads after their own army with orders to kill any Russians who try to flee.

Ukraine security services claim that prisoners of war have told them of the horrific tactic that has reportedly seen Russian guns aimed at their own.

The ‘execution squads’ are a revival of Stalin’s World War Two tactics and are another sign of dire morale among Moscow’s troops, The Mail Online reports.