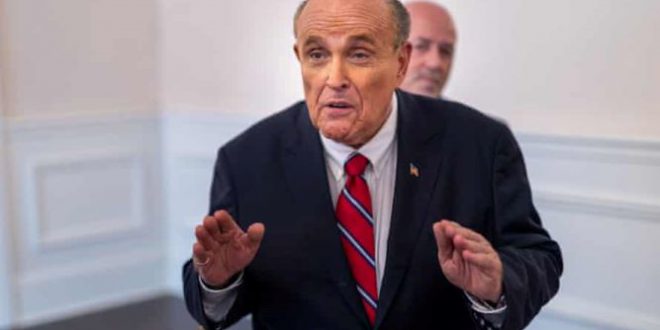 A US appeals court has suspended Rudy Giuliani from practicing law in Washington DC, a move that follows an earlier suspension in New York amid fallout over his baseless claims about the 2020 election.

Giuliani, who led Trump’s legal challenge after his election defeat, was suspended from practicing law in New York last month after a court ruled that he had made “demonstrably false and misleading statements to courts, lawmakers and the public” in trying to overturn the results of the 2020 elections in favor of Trump.

The District of Columbia court of appeals issued the order on Wednesday, citing the suspension of Giuliani’s New York law license. In June, the New York court found he had lied in arguing that the election was stolen. Giuliani’s license will be revoked while disciplinary action over his practices is considered.

The New York appellate division, citing the 6 January riot at the US Capitol, said Giuliani‘s eagerness to trumpet false claims threatened the public interest and could erode public confidence in the election process.

After the 24 June ruling, Giuliani said he would go to court to fight the New York suspension.

The former president’s lawyer and confidant claimed rampant fraud during the presidential election without proof. He will not be allowed to practice law in Washington until New York resolves its case.

The bar suspensions show just how far Giuliani has fallen from his pinnacle as an attorney who served in the No 3 spot in the US justice department, and as the US attorney in Manhattan. He also served as mayor of New York City from 1994 to 2001.