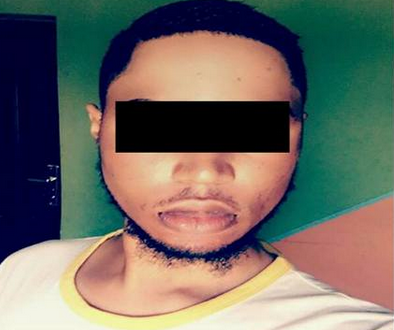 The Rapid Response Squad has released pictures of suspects arrested taking undue advantage and scamming unsuspecting citizens on dating platforms and social media. The RRS also gave an insight into methods used by the alleged scammers.

Michael Atanda who was arrested by RRS operatives recently was blinded by fascination. Hiding under the picture of a handsome London based Nigerian Segun Bayo, he would woo ladies on Facebook, get them to expose their body parts and threaten to expose them in exchange for money. Sadly, for four of his victims, there was no limit. He taunted, blackmailed and extorted till RRS arrested him.

Jaiye, 52, met Bunmi on Badoo. After few months, Bunmi thought of relocating to the USA. She confided in Jaiye, who encouraged her to surrender her N1.4million for visa and another N50, 000 for passport processing. Till now, Jaiye has not turned in the passport or the visa for more than a year.

When questioned by the police, Jaiye started singing how many times he had slept with Bunmi and all he knew about her.

Recently, one Oluwole Falope operating with Instagram handle Froshwhite007 and posing as a USA based lady Shayla was arrested after collecting various forms of money from 15 men seeking to date him.

Sometime in September last year, Shade, after listening to a late night dating programme agreed to meet her blind date in Ikeja. Before this, they had communicated back and forth on phone.

On the said date, her ‘boyfriend’ bought her drinks and so they ate. Unknown to Shade, her date had a new fascination beyond her. He sent Shade to get more drinks. Before Shade came back, the supposed ‘boyfriend’ had absconded with her two mobile phones.