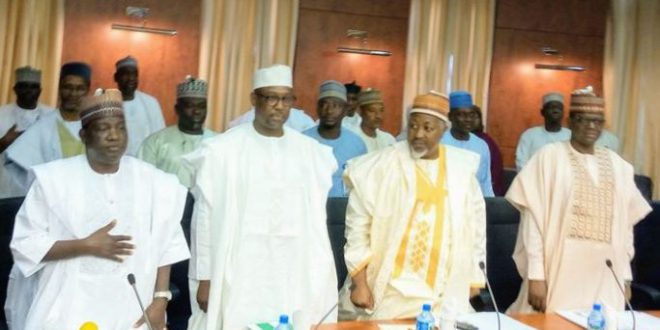 Governors of the 19 northern states have described as unconstitutional, the position of their Southern counterparts that the country’s next President must come from their region.

It would be recalled that in their meetings in Asaba, Lagos and Enugu the 17 governors of the south had demanded that power must shift to their region in 2023.

However, arising from an emergency meeting with northern traditional rulers at the Sir Kashim Ibrahim House, Kaduna, on Monday, the Northern Governors Forum said though some Northern States Governors had earlier expressed views for a power-shift to three Geo-Political Zone in the South, with a view to promoting unity and peace in the nation, the statement by the Southern Governors Forum that the Presidency must go to the South is unacceptable.

Reading from the resolutions of the meeting, Plateau State Governor and Chairman of the Forum, Simon Bako Lalong, said: “The statement is quite contradictory with the provision of the Constitution of the Federal Republic of Nigeria (1999) as amended that the elected President shall secure at least 25 percent of the votes cast in 2/3 states of the federation. In the case of run-up simple majority win the election.”