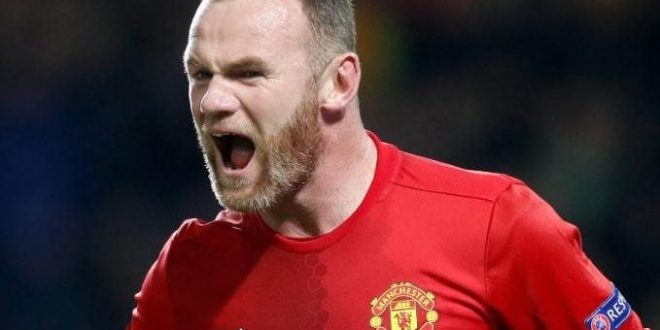 AS Manchester United and England’s leading goal scorer, Wayne Rooney is used to being one of football’s most popular stars – with fans and teammates alike.

But while they rave about the retired pro’s skills, it seems the Derby County boss has more of a comedy take on some of his most esteemed peers.

And nobody, no matter how impressive they are on the pitch, escaped the 36-year-old’s jibes when he appeared on stage at an exclusive black-tie dinner event in Manchester on ­Saturday night.

Recalling playing alongside ­Cristiano Ronaldo, he joked: “Cristiano was so good and so f***ing annoying at the same time. He is probably not as good now but he is probably just as annoying.”

Mocking Ronaldo’s tactics during the 2006 World Cup, when he famously got Wayne sent off — with England later crashing out of the competition — Wayne ­jokingly added: “He likes diving.”

He continued: “I had no issue with Cristiano whatsoever. I spoke to him in the tunnel. I said, ‘I have no issue with you getting me sent off’, because I’d spent the first half trying to get him booked for diving.

“I am English, he is Portuguese. When we are playing I do not give a f*** about him. He is not my mate. But when we have finished, we are mates again.”

Rio Ferdinand, who played alongside Wayne at Old Trafford, also copped some of Wayne’s lip.

He told fans, who had paid up to £300 a ticket to hear him speak at the Mercure Hotel: “Rio is a top player, but he is just arrogant.

“You get paid a lot of money at Man United to kick the ball into the net, so just do it. I said: ‘Do your job, and give me the ball, give Ronaldo the ball. Stop standing there messing about.’ Rio is a top lad but he sometimes did forget he was a defender.”

And Carlos Tevez, who alongside Cristiano was part of United’s famed attacking force between 2007 and 2009, was also sent up by wise-cracking Wayne.

“I used to pick him up from his house for Champions League games and drive him to the airport. We’d play the game and come back. And, honestly, I spoke to him for 30 minutes, and I had no idea what is coming out of his mouth.

“He is just mumbling. I am not a great speaker and I am thinking, ‘F***ing hell. He is mumbling and nothing, nothing’. “I was devastated, it was the biggest disappointment of my life.”

But while mocking his former teammates and foes, Wayne was also quick to call out his own faults. At his self-deprecating best, the star grinned as he admitted he was “an arrogant p***k” when he first started out in football.

And he said a run-in with his Everton youth team boss at the age of 14 while walking home with two bottles of booze and a cigarette had put an end to his early partying ways.

He added: “Sir Alex ­Ferguson tried to sign me when I was 14. He was on the phone to my mum and dad. They said, ‘Alex is on the phone, Manchester United want to sign you’. I said, ‘Tell him to f**** off. I want to play for Everton’.

And he made it clear on Saturday night that he is keeping an eye on Marcus Rashford, one of United’s brightest young players. The 24-year-old has scored 88 goals for the club to date, but has suffered a dip in form this season.

Calling Marcus out, Wayne told the room: “To get the record and be Manchester United’s highest goal scorer, it is f***ing massive. But I hope the record is broken.

“What I hope is that Marcus Rashford f***ing gets his head out of his a**e and goes and breaks that record. He’s a Manchester lad.”

As well as his love for being on the pitch, Wayne enjoyed the camaraderie and changing room banter just as much.

And as his teammates quickly learnt, the striker, who has four sons with his wife Coleen, was incredibly easy to wind up.

He told the sold-out dinner event: “I was just always angry. I was so f***ing angry. I was always arguing. They knew how to push my buttons and I would explode.

“One time we’d been away for three weeks pre-season. I got on the plane, took my suit off, put my pyjamas on and took Night Nurse.

“We’re about an hour from landing and I am getting changed. I put my shirt and tie on and I think, ‘Where the f*** are my pants?’

“As soon as the plane landed I marched to the front of the plane. “You had people like Sir Bobby ­Charlton and Alan Shearer there. “People were looking at me like, ‘What the f is going on?’

“I said to everyone, ‘No one, not even you Sir Bobby, is leaving this plane until I get my pants. I am not walking through the airport in a shirt, tie, and pyjama bottoms’. These s**thouses, my pants made it to the front of the plane.”

But Wayne, or Wazza as he was known to his teammates, could give back as good as he got.

Recalling a prank he played on his good friend and fellow United player Wes Brown, Wayne recalled: “Wes came in with new trainers thinking he was cool.

“Me and Darren Fletcher got a kitchen knife and cut his trainer clean down the middle. He goes to pick his trainer up and he just picked the heel up.”

After leaving United, Wayne briefly returned to Everton before playing in the US for D.C. United.

He later signed a major player-manager deal with Championship side Derby in 2020, and in January last year retired from life on the pitch after being appointed as Derby’s boss full time.

Just eight months after he took the reins, Derby went into administration — leaving Wayne navigating the club through difficult waters.

As The Sun revealed last week, movie star George Clooney is considering helping Wayne by leading a consortium to buy the struggling club.

The Hollywood legend said: “Derby has a fantastic history and I am sure there is a great future too.”

Wayne said on Saturday: “It is such a shame what the club is going through because they deserve more and they deserve better.

“I am doing everything I can to bring the players and the fans together. That is all I can do.”

The hardship is all good training for Wayne’s next big ambition — a move back to Old Trafford.

Much to the delight of the audience, he revealed he would like to one day return as United manager.
Source link
Share