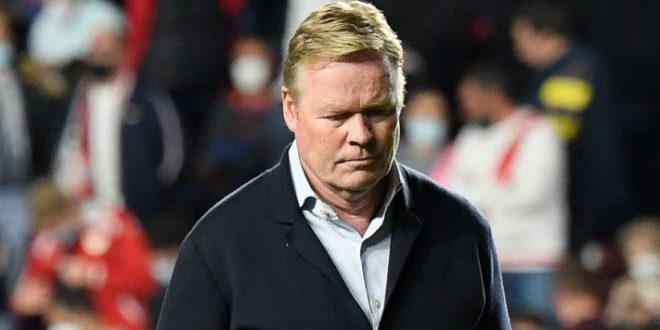 The Dutchman had been a man under considerable pressure at Camp Nou this term, having been expected to depart in the summer.

But with president Joan Laporta unable to persuade a number of targets to take over at the Catalan club, amid their financial difficulties, the ex-Everton and Southampton boss remained in situ during the early months of the campaign.

However, dismal Champions League defeats against Bayern Munich and Benfica, ensured that there was little comfort for Koeman, with the club’s fanbase increasingly disillusioned with his management in the post-Lionel Messi era.

Now, after the weekend Clasico defeat at the hands of bitter rivals Real Madrid was followed up by Wednesday night’s 1-0 loss at Rayo Vallecano, the Barca board have finally parted ways with the 58 year-old.

Radamel Falcao scored the only goal of the game in Madrid, during which Memphis Depay missed a second half spot-kick. The result left Barca sitting ninth in La Liga after 10 games, already six points off the top four.

A statement from Barcelona simply declared: “FC Barcelona has relieved Ronald Koeman of his duties as first team coach.

“The president of the club, Joan Laporta, informed him of the decision after the defeat against Rayo Vallecano. Ronald Koeman will say goodbye to the squad on Thursday at the Ciutat Esportiva.

“FC Barcelona wishes to thank him for his service to the Club and wishes him all the best in his professional career.”

Koeman had worn the expression of a man who knew what was coming as he trudged from the field in Madrid.

Still, he faced the press post-game and spoke about how pleased he had been with his side’s performance in defeat.

He declared: “I think we had chances – good chances – but we didn’t finish them.

“The team has shown today and against Madrid to be at a high level, but it is not enough. What counts is the result, and for me it is incredible that we lost.”

Undoubtedly he wanted to continue. This had been his dream job – albeit one he had only got because years of mismanagement by former president Josep Maria Bartomeu had made it one elite managers didn’t want to touch.

That mismanagement had ultimately led to the summer departure of Lionel Messi, whose otherworldly brilliance had for so long covered up the Blaugrana’s ills.

With Messi having moved to Paris, Antoine Griezmann banished and summer arrival Sergio Aguero only now fit enough to make his first start, Koeman was always on a hiding to nothing this term, particularly given Laporta searched far and wide to replace him in the summer.

But he has never looked like being capable of finding the right formula to keep Barca challenging for titles and trophies – the only thing good enough for supporters who have grown accustomed to silverware – amid the club’s off-field crisis.

For some time it had been a case of when he would depart, rather than if.

That time has now arrived, leaving a club who seemingly just lurches from one crisis to the next these days, to look for a new manager.

Xavi Hernandez, the legendary former player, has already been earmarked as Laporta’s preferred candidate, but can he be persuaded to take the helm at the club in its current state?

Laporta will be hoping the answer is yes, to save another protracted managerial search.