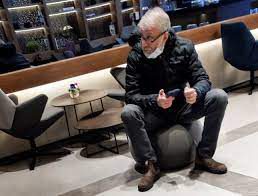 Roman Abramovich broke his cover at a Tel Aviv airport on Monday – moments before jetting off to Turkey.

The sanctioned Russian was spotted looking dishevelled in Israel’s Ben Gurion airport shortly before his jet took off for Istanbul.

Photos show the Chelsea owner sitting in the airport’s VIP lounge with a face mask pulled down over his chin.

He can be seen peering at his phone while glancing overhead.

It’s understood the billionaire drove from his £65million mansion towards the airport earlier in the day.

And his luxury Gulfstream G650ER jet – registered LX-Ray – landed in Turkey just after 3pm this afternoon.

Abramovich, who also holds Israeli and Portuguese citizenship, was among seven Russian billionaires added to the British sanctions list on Thursday as part of efforts to isolate President Vladimir Putin over Russia’s invasion of Ukraine.

This morning, Israel’s Foreign Minister Yair Lapid said the country’s financial, banking and aviation authorities were looking into the issue of Russian oligarch’s in the country.

In a statement made while on a visit to Slovakia, which borders Ukraine, he said: “Israel will not be a route to bypass sanctions imposed on Russia by the United States and other Western countries.”

Abramovich, who has denied having close ties to Putin, gained Israeli citizenship in 2018, quickly putting him in the top three of wealthiest men in Israel.

The oligarch’s two superyachts, My Solaris and Eclipse, could also be on their way to Israel.

According to MarineTraffic, My Solaris is currently docked in a port in Montenegro, departing from Barcelona last week, while Eclipse is currently cruising off the coast of Spain in the Mediterranean.

It comes as the UK impounded a private jet connected to the Russian oligarch at Farnborough Airport, according to CNBC.

He also had £3.2billion of UK assets frozen by the British government over his alleged close ties to Vladimir Putin – stopping him from selling his share of Chelsea Football Club.

Abramovich is worth £10.4billion, according to Forbes, and owns a £150million mansion in Kensington, a £33milliion West London penthouse and yachts, private jets, helicopters and supercars worth more than £1.2billion

The Russian oligarch appears to have also moved both of his superyachts, including Solaris, which boasts its own helipad and missile detection system, and Eclipse, worth £672million.

Chelsea on Friday had their accounts frozen, after sanctions came in to ban the club from selling tickets and merchandise.

Telecom firm sponsors Three pulled out of their £40million-a-year deal with the club, and the team has two weeks to find a new buyer who can fork out the £28million per month wage bill or go into administration.

The Government said it is prepared to approve the 117-year-old club’s sale as long as Abramovich does not receive a penny.

At least four yachts and a private jet owned by Russians or their families have managed to escape the sanctions brought by the west by spiriting them away.

According to Flightradar24, Abramovich’s jet left Moscow’s Knukovo International Airport on Sunday at 16:43 local time and flew through Kazakhstan, the Caspian Sea, Azerbaijan and Turkey before landing in Tel Aviv at 21:18.

One Twitter user has posted the jet’s flight record over the past few weeks.

The plane flew to Moscow from Baku, Azerbaijan, on March 1 and later left for Istanbul and flew to the Ankara the following day, where it stayed before returning to Istanbul on March 4.

On Sunday, it left Istanbul for Moscow before making the trip to Ben-Gurion Airport.

Abramovich’s 787 Dreamliner was also seen moving between Moscow and Dubai in early March while a helicopter belonging to the billionaire was tracked flying around islands in Bermuda in late February, according to the Times of Israel.

It comes as the US warned Israel not to become a safe haven for Russian money.

The US Undersecretary of State for Political Affairs, Victoria Nuland, urged Israel on Friday to join Western sanctions against Moscow and Russian oligarchs.

She added: “What we are asking among other things is for every democracy around the world to join us in the financial and export control sanctions that we have put on Putin.

“We have to squeeze the regime, we have to deny it the income that it needs.

“We squeeze the oligarchs around him, we squeeze its economy. So in that context, we’re asking as many countries as we can to join us. We’re asking that of Israel as well.”