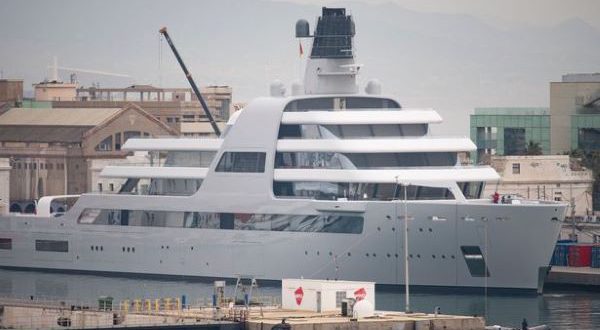 Russian oligarch Roman Abramovich has moved his super-yacht from a shipyard in Barcelona where it had been undergoing repairs, as shown by tracking data.

The super-yacht only took to the sea as recently as last year and is just one of many in the collection of the Chelsea football club owner.

The 460-foot £430million Solaris left the port of a Barcelona shipyard just after 5 pm local time on Tuesday evening, though the company that was taking care of it has declined to comment on its movement.

It was a similar story with Abramovich’s team, a spokesperson for the Russian billionaire claiming: “We never comment on the movements of the yacht or any other vehicles or vessels.”

Abramovich owns another yacht, named Eclipse, that had previously been docked in Barcelona, but is now in the Caribbean Sea near the British Virgin Islands.

The boat has been at that same location since late last year and the timing of the movement has raised question marks given the backdrop of controversy following Abramovich.

The 55-year-old has been the subject of intense scrutiny due to his relationship with Russian president Vladimir Putin following his decision to invade Ukraine over a week ago.

Alisher Usmanov had his 512ft yacht seized by German authorities in Hamburg just two days before he both faced sanctions and saw all commercial ties he had with Everton football club cut.

Usmanov had bought his super-yacht for a staggering £447.5million sum back in 2016.

It had originally been docked in Germany for maintenance but is now in the possession of the authorities after the 68-year-old was hit by sanctions.

His company USM had enjoyed a business relationship with the Toffees while club owner Farhad Moshiri was the chairman of USM Holdings..

Everton released a statement that read: “Everyone at Everton remains shocked and saddened by the appalling events unfolding in Ukraine.

“This tragic situation must end as soon as possible, and any further loss of life must be avoided.

“The players, coaching staff and everyone working at Everton is providing full support to our player Vitalii Mykolenko and his family and will continue to do so.

“The club can confirm that it has suspended with immediate effect all commercial sponsorship arrangements with the Russian companies USM, Megafon and Yota.”

According to Reuters, the European Commission has lined-up a new set of sanctions against Russia and Belarus over the invasion of Ukraine that will impact additional Russian oligarchs and politicians as well as three Belarusian banks.

There remain three other super-yachts owned by Russian oligarchs still in the Barcelona ship-yard.