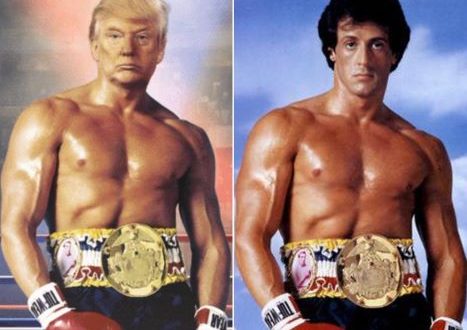 DONALD Trump tweeted a bizarre photo of himself as Rocky on Wednesday after claiming the doctor who performed his physical had praised his “gorgeous chest”.

The US President shared the mocked-up snap in an attempt to liken his battle against the Democrats to the heroics of film boxing legend Rocky Balboa.

Rocky, played by movie tough-guy Sylvester Stallone, was renowned in the films for being able to take a beating like no other fighter.

Trump’s snap – which set social media alight as he began his Thanksgiving holiday at his plush Mar-a-Lago retreat – followed his electrifying speech to supporters in Florida.

At one point in the homecoming rally, Palm Beach resident Trump referred to his recent presidential physical examination.

Boasting of his good health, Trump even claimed the doc heaped praise on his “gorgeous chest”.

‘TAKE OFF YOUR SHIRT’

He told supporters that medics told him: “Take off your shirt, sir, and show us that gorgeous chest!”

During his rally at Sunrise, near Miami, on Tuesday, President Trump also hit back at alleged reports which apparently claimed he had suffered a secret heart attack. 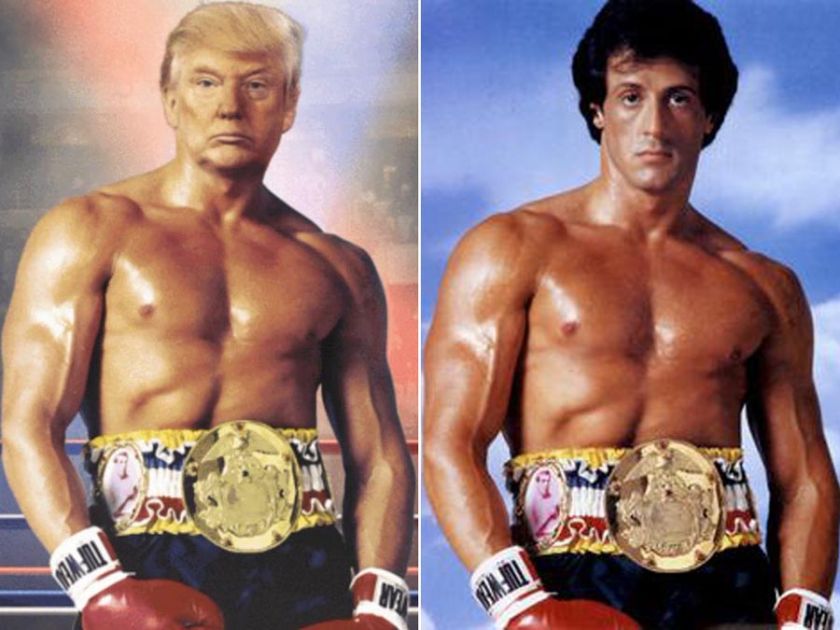 But the President did not specify which media outlet, if any, had made the allegation.

Trump was out of the public eye for two days following a trip to Walter Reed National Military Medical Center in Bethesda, Maryland, on November 16.

The President told how he returned to the White House to find worried wife Melania, who asked him: “Darling are you ok? They are reporting that you may have had a heart attack.”

Trump claimed that when he returned to the White House, Melania said: “Darling are you ok? They are reporting that you may have had a heart attack.”

He also said that his public relations team were asking if he was alright as they had also heard that he had suffered with heart problems.

Blasting so-called “fake news”, Trump claimed: “They [the media] said, he wasn’t wearing a tie. Which is pretty unusual for me honestly. I should have worn the tie. Maybe it wasn’t their fault.

“They never apologize. They said he wasn’t wearing a tie. This is a sign of a massive heart attack.”

The 73-year-old also used the Florida rally to air his thoughts on what he called ongoing “bull****” impeachment inquiry.

He raged: “First it was the Russia hoax, and now some maniacs are pushing the deranged impeachment.

“You see what’s happening in the polls? Everybody said: ‘That’s really bull****,’” he added, resulting in the crowd of nearly 20,000 chanting the swear word.

They also shouted “lock her up” after he attacked his former rival Hilary Clinton.

He insisted that he has done nothing wrong in his dealings with Ukraine – and argued the Democrats were using it against him because they “cannot win the next election.”

“If they’re elite, then we are the super elite.”

Florida will be a critical state for the current President as he campaigns for re-election.

He carried it by less than two percentage points in 2016.

Trump told the audience: “Less than one year from now I will join voters across the Sunshine State, my home, as we head to the polls.

And he predicted: “Together, we will win back the House, we will hold the Senate and we will keep that beautiful, beautiful White House”.

Anti-Trump protesters floated a baby Trump balloon while chanting “lock him up” outside the rally.