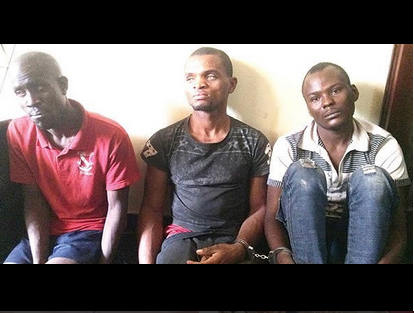 I Only Rob Expatriate Worshippers At National Mosque – Beggar

A 27-year-old beggar, Bashir Adamu, who was arrested for allegedly assaulting motorists and snatching phones and handbags, on Tuesday, revealed that his targets were expatriates who worshipped at the National Mosque, Abuja.


He was arrested along with two others. He said that he operated on Fridays during Juma’at prayers. Police sources revealed that the suspect was arrested about a fortnight ago for snatching a phone at the mosque, adding that he was arraigned and granted bail before he was re-arrested for a similar offence last Friday.

Adamu, who admitted that he was just released on bail, said, “I only target oyinbo people (expatriates) who come to the National Mosque to pray on Fridays. Sometimes, they give alms and while they are doing that, I steal their phones or bags from their car and run. I use the money to feed.”

Other suspects arrested with him are, Alex Chidubem, 30, arrested after allegedly stabbing a technician, Yusuf Awala, from whom he had allegedly stolen a phone, and Ibrahim Mohammed, 22, who revealed that he had stolen two phones and had been arrested three times for the same crime.

Previous Man Hails Buhari After Making Over N1m From His Rice Farm
Next Popular Nigerian Activist Beats Up His Wife, Locks Her Up In The House