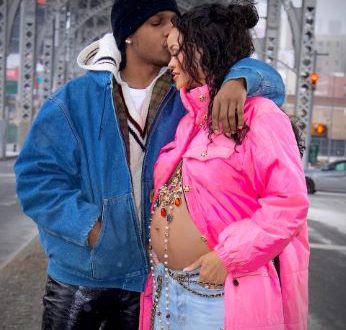 RIHANNA is expecting her first child with boyfriend A$AP Rocky.

The Barbados-born singer, 33, revealed her baby bump in a series of images taken as she strolled around New York with her partner over the weekend – wearing a £5k pink coat.

Despite the freezing weather, Rihanna ditched a top beneath the coat and instead wore a string of pearls and a jewelled cross necklace.

The star, whose hits include Shut Up and Drive and Diamonds,  and the rapper, also 33, have known each other for almost a decade, but their relationship turned romantic in 2020.

They stopped to kiss and hug as they strolled hand in hand, with A$AP tenderly kissing her head at one point

Fans speculated she was pregnant in November of last year after she reportedly asked staff not to smoke around her when she attended Barbados’ first-ever presidential inauguration.

Some also claimed they had seen a baby bump.

But she shut down rumours the following month, when a fan tweeted her: “Can I come to the baby shower sis!? True or not your babies are going to be beautiful. Sorry everyone’s up in your uterus right now.”

She responded: “Ha! Stop! You ain’t came to the first 10 baby showers! Y’all breed me every year dammit lol.”

A$AP – real name Rakim Athelaston Mayers – confirmed his romance with Rihanna last year, describing her as “the love of [his] life.”

He said: “She amounts to probably, like, a million of the other ones. I think when you know, you know. She’s the one.”

The rapper added that his forthcoming record All Smiles was “absolutely influenced” by Rihanna.

In September of 2021, the couple made their red carpet debut at the Met Gala.

Fans also speculated she was pregnant then as she chose to wear a baggy outfit.

Speaking previously about her plans for motherhood, when asked where she envisions herself in a decade, she told British Vogue: “Ten years? I’ll be 42! I’ll be ancient. I’ll have kids – three or four of ’em.”

Rihanna has dated numerous high-profile men throughout the years.

From 2007 until 2009, Rihanna dated Chris Brown. The two broke up after an incident when Brown allegedly physically assaulted her.

The star went on to have an on-again, off-again relationship with rapper Drake, with the two seemingly ending on a bad note.

Rihanna briefly dated Travis Scott in 2015, but the romance fizzled out shortly after it began.

She dated Saudi businessman, Hassan Jameel, for three years before the couple split in January of 2020.