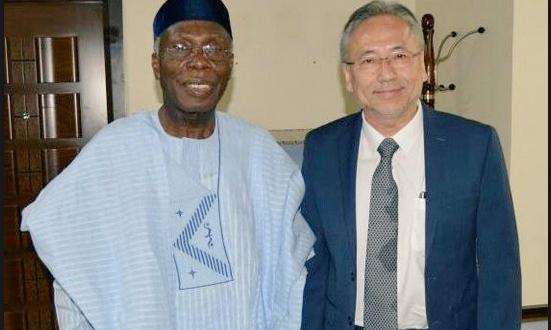 Wattana Kunwongse, Thailand’s ambassador to Nigeria, has faulted a claim reportedly made by the Minister of Agriculture, Audu Ogbeh, that Thailand accused Nigeria of being responsible for the collapse of its seven rice mills following the drastic fall in rice importation from the country.The ambassador, in a letter sent to PremiumTimes on Tuesday, described the minister’s claim as “misleading and a distortion of the actual discussion that transpired between them”.

The minister had been quoted as saying: “just like two weeks ago, the Ambassador of Thailand came to my office and said to me that we have really ‘dealt’ with them.

But I asked what did we do wrong and he said unemployment in Thailand was one of the lowest in the world, 1.2 per cent, it has gone up to four per cent because seven giant rice mills have shut down because Nigeria’s import has fallen by 95 per cent on rice alone”.

However, the diplomat said Mr. Ogbeh may have lied. “The report is not only misleading but a distortion of the actual conversation between myself and the honourable Minister on 30th January 2018, which was nothing short of positivity and optimism on both sides.

During which I praised President Buhari’s Economic Recovery and Growth Plan (ERGP), the essence of which is the endeavour to move the country to a self-sufficiency and export-oriented economy.”

He added that the report could not have been farther from the truth as Thailand’s official figures demonstrate that its rice export to the world in 2017 reached 11.48 million tons worth $5.1 billion.

“Thailand’s rice export to the world in 2017 (January-December 2017) reached 11.48 million tons equalising to $5.1 billion (USD), a 15.54% increase compared to previous years, which is one of the highest figures on the history Thailand’s rice exportation. There is no proof of any shutdown of Thailand’s major rice mills,” he said.