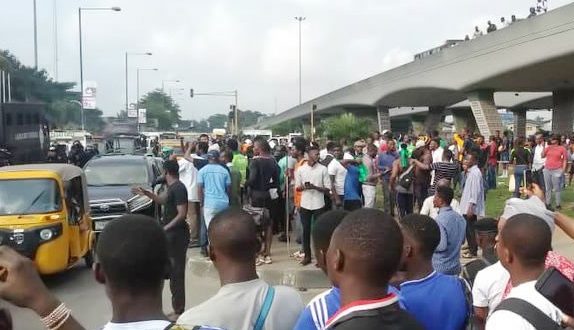 Rowdy scene at the National Stadium, Surulere, Lagos, on account of the #RevolutionaryNow protest

Despite the heavy rainfall in Abuja, #RevolutionNow activists on Monday stormed the National Human Rights Commission, Maitama, to protest the poor security situation and other social issues in the country.

The protesters had planned to hold the rally at the Unity Fountain but were forced to change the venue due the lockdown of the park by armed policemen.

The protesters delivered a letter to the NHRC in which they expressed their displeasure over what they called the continued silence of the Commission over the undemocratic incidences in the country.

Coordinator of the protest, Dare-Atoye Ariyo said, “The ever-growing proclivity of the President Buhari-led regime for human rights abuses are indicative of a complete departure from all democratic tenets, norms and practices.”

He pointed to the arrest of the #RevolutionNow protest convener, Omoyele Sowore, by the Department of State Services, describing it as undemocratic and disgraceful.

Atoye stated, “We believe that these events are not only undemocratic, but they are also disgraceful for a country like Nigeria that practices constitutional democracy.

“However, we are completely dissatisfied by the eerie silence of the National Human Rights Commission in the face of these undemocratic developments.

“Our dissatisfaction is further aggravated by the fact that the role of the NHRC in defending the constitutionally guaranteed rights of Nigerians is well-revered and dearly treasured by Nigerians.”