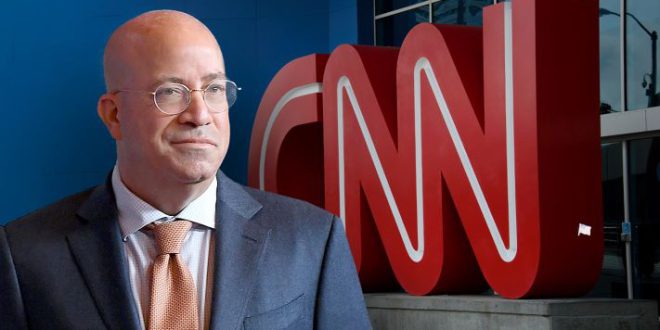 Embattled CNN boss Jeff Zucker walked away from the liberal network on Wednesday after failing to disclose a "consensual relationship" with a CNN staffer. (Getty Images)

REVENGE!  CNN boss Jeff Zucker FORCED  to resign by Ousted Chris Cuomo by blowing the whistle on his open-secret affair’ with a staffer

Ousted Chris Cuomo forced Jeff Zucker’s resignation from CNN by blowing the whistle on his years-long, open-secret affair with staffer Allison Gollust while fighting for his $18million severance pay, according unnamed media sources.

In a statement on Wednesday, Zucker said he was stepping down for failing to disclose his relationship with Gollust when he was being interviewed as part of the investigation into Chris Cuomo.

He and Gollust claim the romance started during COVID, but media sources tell DailyMail.com it long predates the pandemic and was an open-secret in the CNN offices.

They lived in the same apartment building with their respective families, have worked together at NBC and then CNN for more than 20 years, and had what some called an ‘uncomfortably cozy’ rapport.

They are both now divorced, and one source told DailyMail.com that their splits were due in part to their relationship. Politico cites two unnamed sources who say Chris Cuomo’s legal team is who brought it the romance to the surface in negotiations for the ousted host’s severance pay.

Now, DailyMail.com can confirm that CNN has also received a letter from Chris Cuomo’s lawyers demanding that all communications between Zucker, Gollust and Andrew Cuomo be preserved.

This was first posted in a tweet by Matthew Belloni. Source says that besides the emails and other communications that would reveal the long term intimacy between Zucker and Gollust they would also reveal how Zucker pressured Andrew Cuomo to appear on CNN and how he pushed his personal agenda on Donald Trump and other conservatives with ‘potent negative story lines.’

Chris was fired in December last year after an internal investigation found he had helped his brother Andrew, former Governor of New York, navigate through a sexual misconduct scandal, while still working as a CNN host. 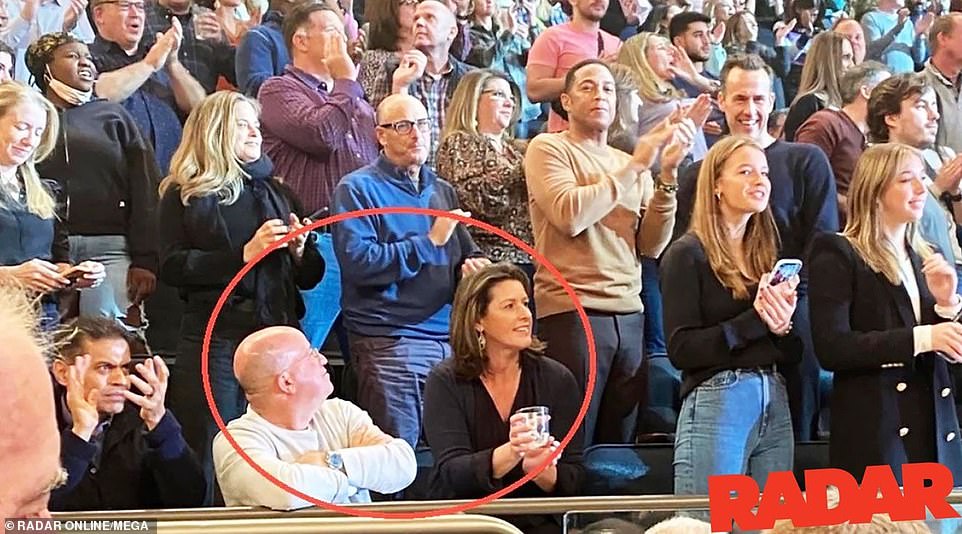 ‘Open secret’: Jeff Zucker and Allison Gollust at the Billy Joel concert at Madison Square Garden on November 5, 2021 with Don Lemon (right) and Fareed Zakaria (bottom left).  Zucker stepped down as President
of CNN on Wednesday as a result of their romance and the fact he lied about it while being quizzed for the investigation into Chris Cuomo. Picture courtesy of Radar Online 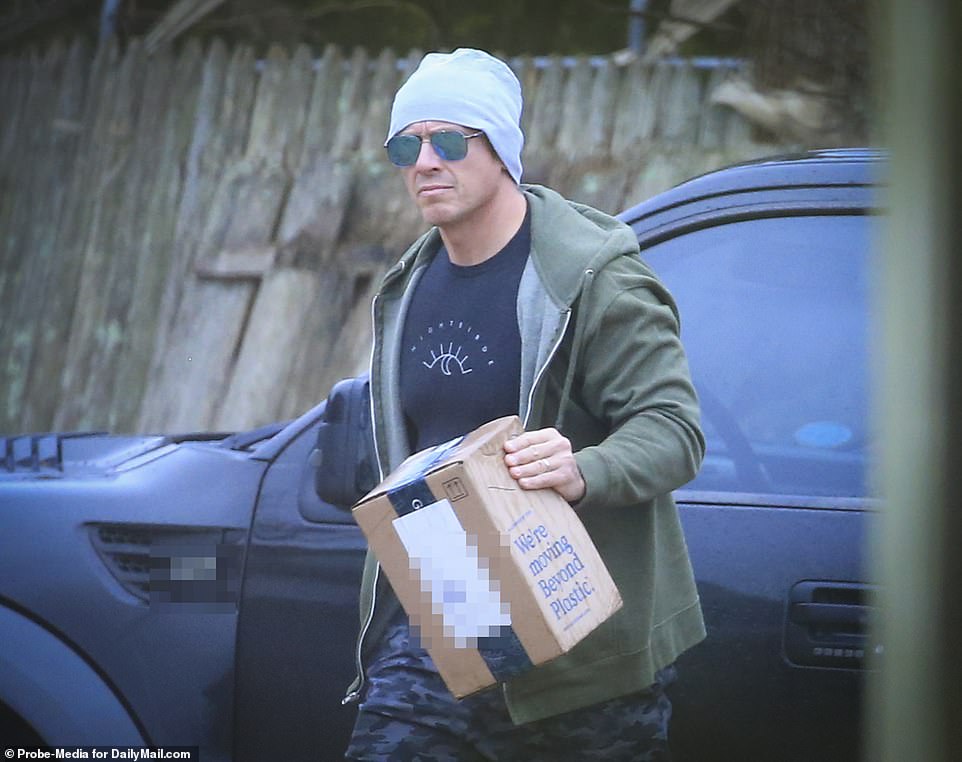 Chris Cuomo’s legal team blew the whistle on the affair while negotiating his severance package from CNN, according to Politico’s sources. Chris was arguing that he should not be penalized for a conflict of
interest with his brother when Zucker, the boss, was guilty of fostering one of his own 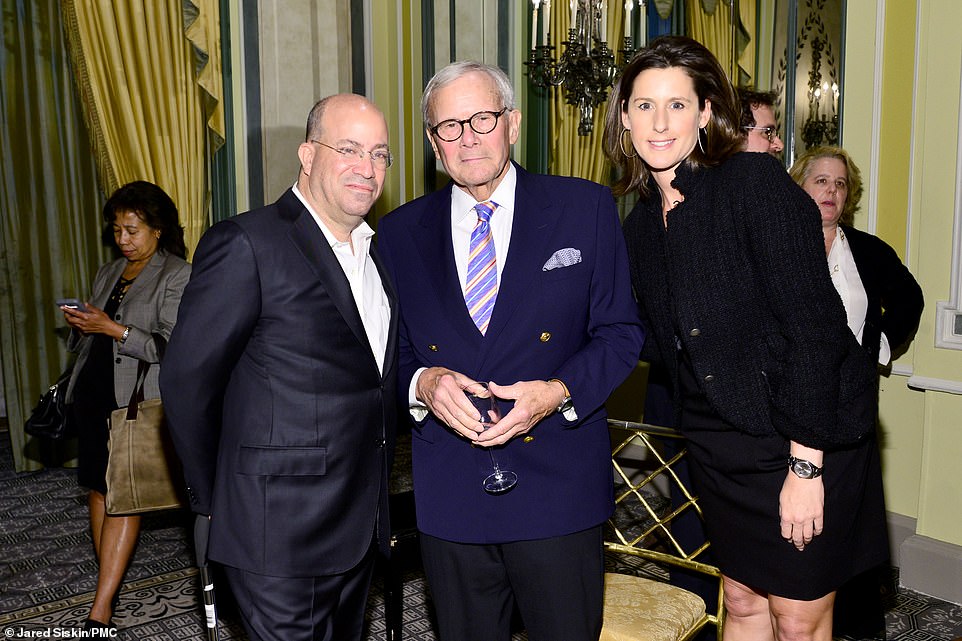 Jeff Zucker is pictured with Allison Gollust in 2016. The pair are shown with Tom Brokaw (center). Their romance was an ‘open secret’ at CNN, according to insiders who tell DailyMail.com they are
lying about it only evolving in ‘COVID’ 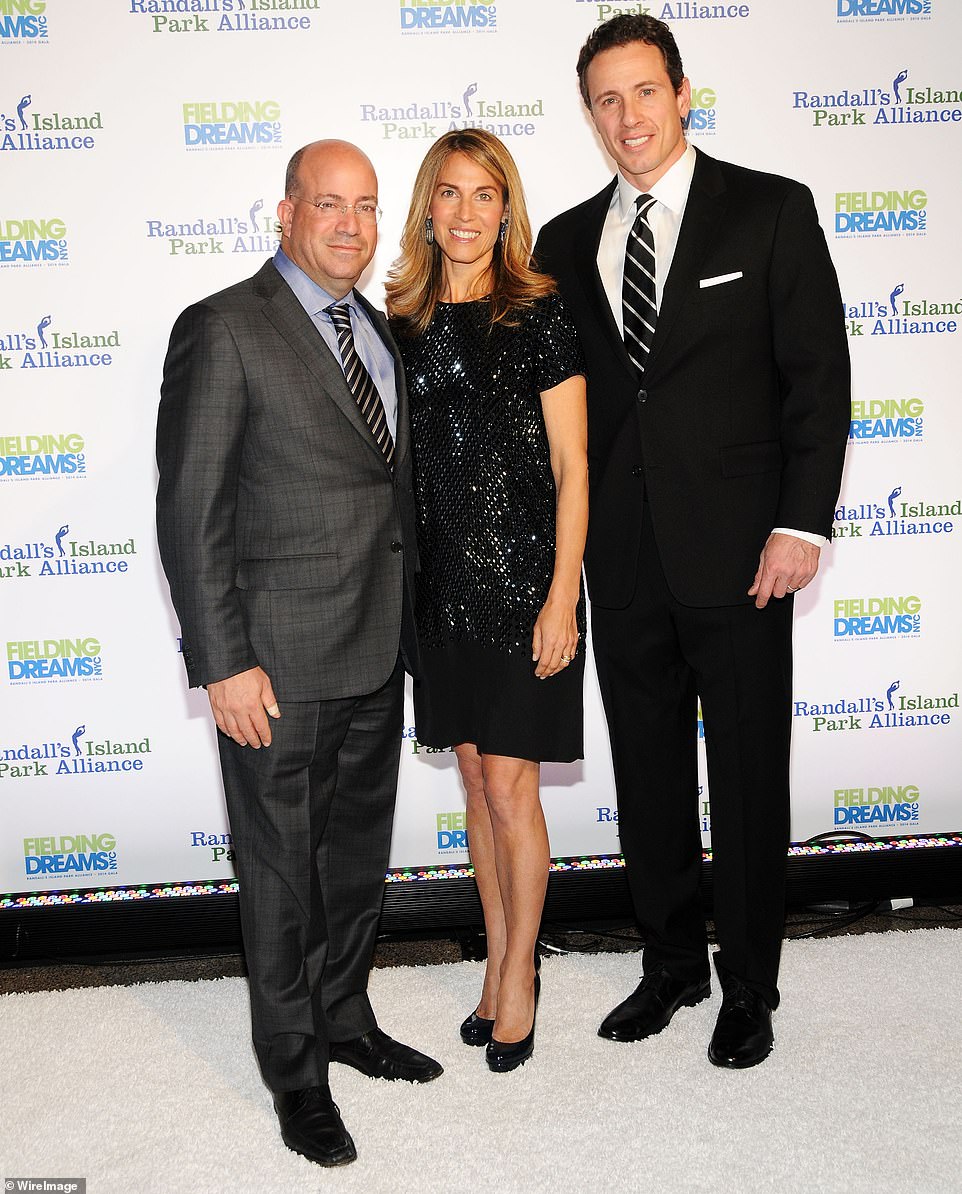 Zucker with his ex-wife Caryn and Chris Cuomo in 2014, the year after Zucker joined the network 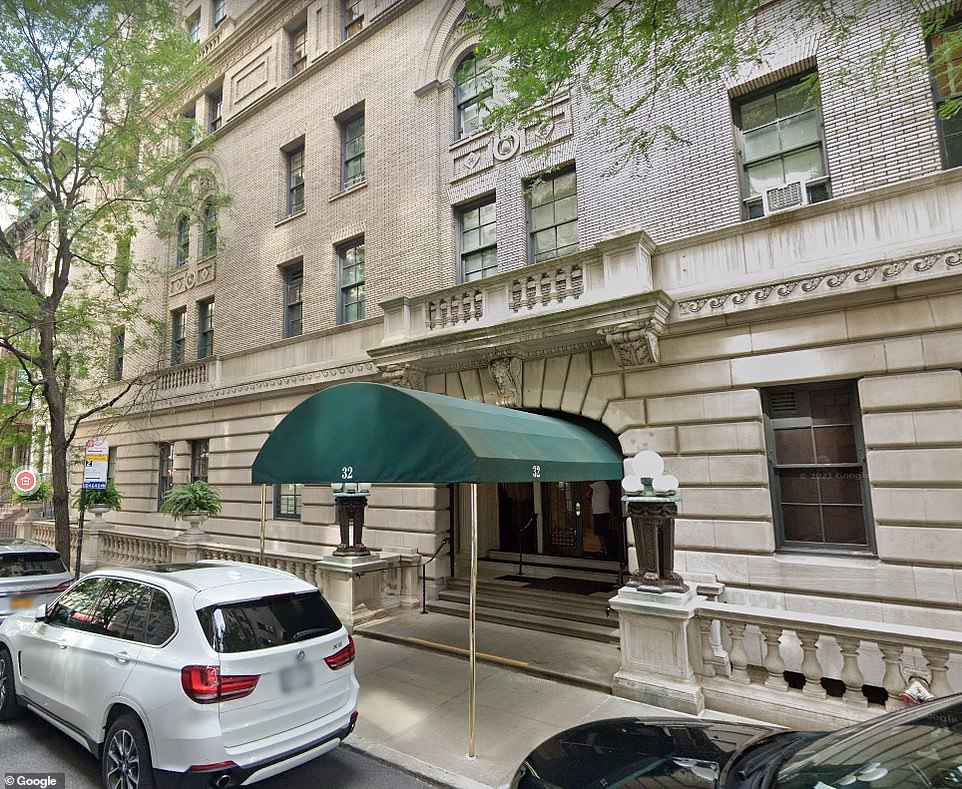 Both Zucker and Gollust both lived in this Upper East Side apartment building with their respective families. Sources say her apartment was a floor above his. He is understood to
have sold his apartment there in 2018, during his divorce

He is still fighting for $18million – the remainder of his contract – but Zucker has refused to pay out, citing the conflict of interest between Chris’s relationship with his brother and his on-air reporting for CNN.

According to Politico’s sources, Cuomo’s team said it was hypocritical for Zucker to fire Chris for a conflict of interest when he has one of his own in his relationship with Gollust.

Gollust, who worked as Andrew Cuomo’s communications director briefly, is also divorced, though it is unclear when she and her husband Billy – who runs a trading platform – split. Billy has not commented.

One source told DailyMail.com on Wednesday that the affair was an open secret for years.

‘Jeff’s affair with Allison has been going on forever – not since COVID!

‘Everyone has known it but he still denied it. It was part of the reason for his divorce, but not the only reason.

‘It was inevitable that it would come out – he should have been up front sooner.’

Another said: ‘It was the worst kept secret inside the building.

‘Jeff’s office was right next to Allison’s office at Hudson Yards and before that at the Time Warner Center on Columbus Circle.

‘The joke was they weren’t only sharing a wall. No one believes that this only happened over pandemic. They have been close for years.

‘The closest it ever came to being outed was when Page Six reported on their “heavy exchange” at the Hollywood Reporter’s 35 Most Powerful People in NY Media party.

‘They had a very public fight at the party that didn’t seem to have anything to do with work.’

Zucker admits lying about when the romance began during the investigation into whether or not Chris Cuomo, formerly the network’s most successful host, helped his brother, former New York Governor Andrew Cuomo, through his sexual harassment scandal.

‘I acknowledged the relationship evolved in recent years. I was required to disclose it when it began but I didn’t. I was wrong.

‘As a result, I am resigning today,’ he said.

According to an internal email, Michael Bass, Amy Entelis and Ken Jautz will take over as interim bosses, with Bass heading up the new leadership team.

But sources say Bass – who Zucker promoted to replace himself as Executive Producer on the Today show – is one of Zucker’s right-hand men and shouldn’t be considered for the job.

‘The appointment of Michael Bass to the top job – even on an interim basis is outrageous.

‘Michael and Jeff are very close friends. Both went to Harvard and both have looked after each other throughout their careers.

‘It’s such a boys club and an absolute joke.’

Zucker is widely concerned one of the most powerful men in media.

He has made a long list of enemies throughout his career – most notably Donald Trump, who celebrated his resignation.

Zucker’s resignation is effective immediately but Gollust will stay on at the network as an Executive Vice President of PR at CNN, and will be staying on in her role despite Zucker’s departure.

Chris Cuomo has been at war with CNN since he was fired in early December.

The network fired him after an investigation by the New York Attorney General’s Office revealed the deep extent to which he’d helped his brother Andrew navigate a sexual misconduct scandal.

Chris ignored the subject on his nightly CNN talk show, but used his journalistic sources to research some of the women making claims against his brother, according to the AG report.

CNN also received a claim that he had been sexually inappropriate with a staff member in the days before he was fired. Chris Cuomo vehemently denied that claim.

Gollust, who said she will remain at the network, confirmed the affair in a statement Wednesday released to the New York Times.

‘Jeff and I have been close friends and professional partners for over 20 years,’ she wrote.

‘Recently, our relationship changed during COVID. I regret that we didn’t disclose it at the right time.

‘I’m incredibly proud of my time at CNN and look forward to continuing the great work we do everyday.’

The couple was spotted together at a Billy Joel concert last November, where they were called out for defying mask regulations, but their romance was not picked up on.

In 2017, Zucker and Gollust were seen in a heated argument at the Hollywood Reporter’s 35 Most Powerful People in NY Media party.

A source explained at the time that while the party was taking place, Zucker and Gollust suddenly started intensely speaking and making anguished hand gestures before Gollust stormed away into the crowd.

‘It looked like she was reprimanding her husband or something,’ mocked an unnamed rival news executive at the time.

Other journalists have pointed to the romance too.

In her book, Katie Couric told of how Zucker tried to push Gollust onto Couric’s show, despite the fact there was no role for her.

‘I had to wonder why Jeff was angling so hard to bring Allison on board.

‘She and her husband and kids had moved into the apartment right above Jeff and Caryn’s—everyone who heard about their cozy arrangement thought it was super strange.

‘By that point, Caryn (Zucker’s ex-wife) had become a close friend and it made me really uncomfortable,’ Katie wrote in her memoir.

Zucker made a long-list of enemies over the years at CNN, most notable of whom is Donald Trump.

Trump celebrated his resignation on Wednesday, saying in an emailed statement: ‘Jeff Zucker, a world-class sleazebag who has headed ratings and real-news-challenged CNN for far too long, has been terminated for numerous reasons, but predominantly because CNN has lost its way with viewers and everybody else.

‘Now is a chance to put Fake News in the backseat because there may not be anything more important than straightening out the horrendous LameStream Media in our Country, and in the case of CNN, throughout the World.

‘Jeff Zucker is gone—congratulations to all!’ he said.

Megyn Kelly, former FOX News host, tweeted: ‘Zucker’s relationship with Gollust went on for years, and what he did to keep her near him (as he kept advancing her up the line) will be even more stunning to the CNN news room.’

Charles Igbinidu is a Public Relations practitioner in Lagos, Nigeria
@https://twitter.com/ionigeria
Previous Anxiety As DRUNK Policeman Guns Down Soldier At The Palace Of The Shehu Of Borno
Next Why Arsenal’s policy of terminating contracts makes perfect sense: Letting Aubameyang, Ozil and Willian leave early has not only saved them almost £50m in wages but —-