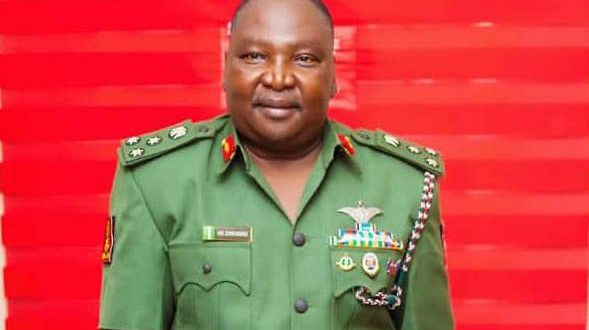 Revealed: How ISWAP killed Brig-Gen. Dzarma Zirkushu by ramming a bomb-laden car into his vehicle

Senator Ndume (Borno South) was addressing reporters in Abuja over the attacks on Askira in Borno by ISWAP terrorists during which Zirkushu, some soldiers and many terrorists were killed.

He said: “ISWAP terrorists attacked a town there. They knew that the General was the major obstacle to their operation. They laid an ambush and rammed a bomb-laden car into his vehicle.

“He was a gallant soldier. He took the fight to the terrorists. His death has sent panic to people in that area.”

Ndume also raised the alarm that ISWAP fighters were regrouping in the Lake Chad axis.

He said though the troops had been taking out key ISWAP commanders in Borno, the intensity of the attack on Askira was worrisome and urged other security agencies to give the army the needed support.

He urged residents around Chibok area to be calm and not relocate, assuring that the Nigerian Army has what it takes to take the fight to the insurgents.

He said: “I want to express my condolences to the Nigerian Army over the death of the General who died along Chibok road.

“For now, we’ll assume that it was an isolated case. But the intensity with which they came is worrisome.

“The military is aware and the Air Force is providing surveillance in the area. It was a revenge mission. The army has been taking out key ISWAP commanders and they had their revenge.”

Charles Igbinidu is a Public Relations practitioner in Lagos, Nigeria
@https://twitter.com/ionigeria
Previous Kidnapped RCCG Pastor and two others freed in Calabar
Next Why Manchester United could be stuck with Solskjaer until the end of the season