Home / Technology / Revealed: How Israeli technology was used to remove drone threat from the Pope during mass in Slovakia 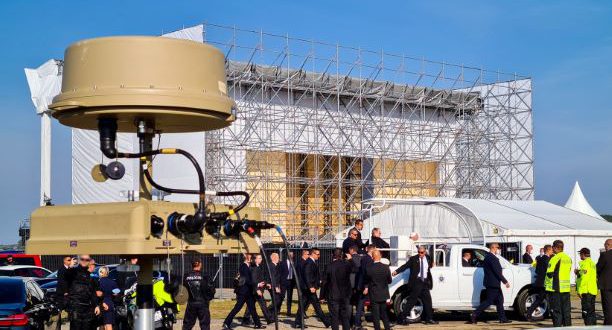 Revealed: How Israeli technology was used to remove drone threat from the Pope during mass in Slovakia

Spread the love
An Israeli anti-drone company’s technology removed a rogue drone that was interrupting a mass held by Pope Francis   with 60,000 worshippers in Slovakia, The Jerusalem Post has revealed.
The highly sensitive incident, which was managed and resolved by D-Fend, occurred back on September 15, but the embargo on revealing it to the public has only been removed now.
There were also 90 bishops and 500 priests present during the incident at the giant event.
D-Fend said it worked with the Slovakian Interior Ministry to protect the pope, his retinue and attendees from the threat of rogue drones throughout multiple events in Slovakia from September 12-15, culminating with the open-air Mass in Šaštín, home to the National Marian Shrine.
The EnforceAir product developed by D-Fend was deployed with its ground-level tactical kit to provide 360-degree coverage.
A drone is seen being tested in Hadera. (credit: AVIVA BAR-ZOHAR)
In addition to the overflowing crowd, there were several counter-drone security challenges, including many antennas and communications systems in the area, with an associated high radio frequency interference environment, said D-Fend.
Next, D-Fend said several drones were identified near the event, but that the local police immediately identified them as authorized and “friendly”.
EnforceAir’s technology recognizes and permits authorized drones to operate in the airspace, focusing its defensive capabilities on mitigating rogue drones.
A previously unseen do-it-yourself drone was detected by EnforceAir during the mass.
Initially, when the police decided to mitigate the potential threat, they considered using a jammer-based solution.
However, they quickly changed approaches, realizing that such jammers could potentially disrupt communications systems operating in the area. They were also concerned about halting media transmissions surrounding the pope’s address during the mass, as well as disrupting security base stations, which could create a separate security risk.
“EnforceAir fended off the rogue drone, sending it back to its original takeoff position, far away from the large crowd,” D-Fend said.
“Protecting such a high-profile event is of the utmost importance, so we wanted to utilize a counter-drone technology that is best suited for crowded events and sensitive situations,” said a representative of the office responsible for the pope’s protection during his stay in Slovakia. “EnforceAir’s innovative solution took control of the rogue drone that threatened the potential safety of the pope, the crowd and the VIPs in attendance, quickly and easily.”
D-Fend chairman and CEO Zohar Halachmi said, “It is an honor to be trusted with safeguarding such important events and to assist our homeland security and law enforcement customers. The best practices we have learned from having clients use our technology to protect VIPs at massive events worldwide have been incorporated into EnforceAir, facilitating a seamless, end-to-end drone incident lifecycle.”
The company said, “The incident reflects the growing danger posed by drones to officials around the world and to large events. The incident ended safely because of counter-drone technology that was deployed by D-Fend at the scene. The G7 Summit also leveraged D-Fend’s technology to protect world leaders this summer.”
According to D-Fend, “Drones are posing an increasing threat to national security around the world – to critical infrastructure, civilians, and now to leaders.”
The anti-drone company noted recent attempts to assassinate Iraqi Prime Minister Mustafa al-Kadhimi and Venezuelan President Nicolas Maduro using drones.
Share

Charles Igbinidu is a Public Relations practitioner in Lagos, Nigeria
@https://twitter.com/ionigeria
Previous UK to remove Nigeria and ten other countries from red list
Next UAE threatens to pull out of $23 bln F-35, drone deal with US