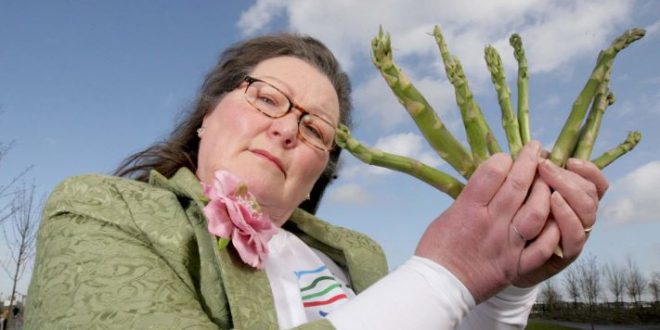 Jemima Packington, who uses asparagus spears to predict the future, has laid out 2022 for us (Image: SWNS)

A British fortune-teller who makes predictions using asparagus spears has revealed her outlook for 2022 – with royal scandals and sporting success afoot.

Jemima Packington, 65, also known as “Mystic Veg”, claims she can see the future by tossing asparagus into the air and interpreting how they land.

Over the years Jemima has predicted Brexit, Harry and Meghan stepping down as senior royals, and Boris Johnson becoming the PM.

Although they’re top of the table at the end of 2021, Jemima doesn’t think Man City will clinch the Premier League title – with derby rivals Man Utd being a dark horse in the race.

As for the World Cup in Qatar at the end of next year, she’s tipped Croatia to lift the trophy. 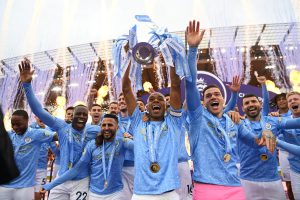 Jemima, from Bath, has been making predictions since she was eight years old – and says she inherited her gift from her elderly aunt who read tea leaves.

She said: “My technique has not changed and I still cast the asparagus spears and interpret the patterns in them.

“Seeing the patterns for me is instantaneous, possibly that is because I’ve had years of practice.

“Occasionally I get one slightly off, where I haven’t quite read it correctly, but I’m never far off.”

Jemima added people laughed at her several years ago when she tipped Boris Johnson to be Prime Minister one day – but now she’s having the last laugh.

To make her predictions, Jemima uses fresh Worcestershire asparagus grown in the Vale of Evesham

She picks a handful of tips, tosses them into the air and “reads” the shapes they form when they land.

Earlier in 2021, Jemima predicted Christmas celebrations in the UK would be modest once more – which turned out to be true when a surge of Omicron swept the nation.

In 2020, she also predicted royal births and a bereavement – which was again proved true when the Sussexes announced the birth of Lilibet and Prince Philip died.

“I’ve been told the predictions this year are among my most controversial but I only go on what the asparagus tells me,” she said, adding some feelings she gets are “stronger than others.”

In particular, she said she has a strong feeling Keir Starmer wouldn’t be in post as Leader of the Opposition by the end of 2022 – saying the asparagus snapped when she tossed it into the air.

also have a strong feeling about further royal turmoil. The asparagus formed a crown motif and that is how I know something is going to happen to the Royal Family,” she added.

In 2019 she correctly predicted cricket success for England, Big Brother returning to our screens and US romantic musical ‘A Star is Born’ winning an Oscar.

Other predictions of Jemima’s that came true were Andy Murray winning Wimbledon and the credit crunch.