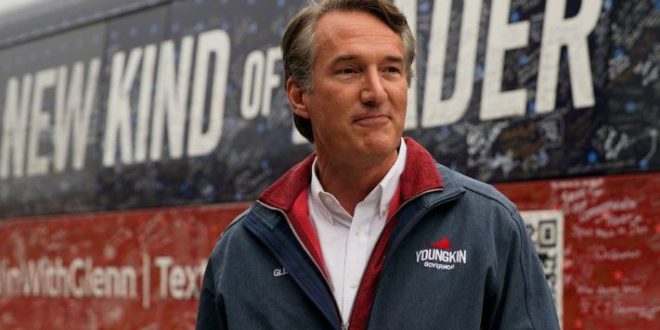 Glenn Youngkin is projected to win Virginia’s gubernatorial contest, defeating former Gov. Terry McAuliffe (D) and becoming the first Republican to win a statewide election in the Old Dominion since 2009.

Youngkin, who was virtually unknown to most Virginia voters at the beginning of the year, previously served as the CEO of the private equity firm Carlyle Group before stepping down in 2020. The Republican won the state’s GOP convention in May, defeating six other candidates.

In his victory speech shortly after 1 a.m. in Chantilly, Youngkin spoke of a “new day” for Virginia.

His victory is a major upset over McAuliffe, who has long been a fixture of Democratic Party establishment politics, previously serving as the governor from 2014 to 2018 and chairman of the Democratic National Committee from 2001 to 2005.

The Democratic defeat also serves as a warning for the party going into the 2022 midterm elections, which are widely being viewed as a referendum on President Biden’s first two years in office. As the polls tightened between McAuliffe and Youngin, Biden’s approval rating ticked down in Virginia.

Throughout the election, Youngkin was careful to walk a fine line when it came to former President Trump. While he said he was “honored” to receive Trump’s endorsement after winning the convention, he did not appear with the former president on the campaign trail.

McAuliffe and his allies long worked to tie Youngkin to Trump due to the former president’s deep unpopularity in Virginia. However, Youngkin’s win appears to be confirmation that the strategy did not pay off as expected, sending a signal to Republican and Democratic candidates going into the midterms.

The Republican upset in Virginia also points to Youngkin’s success heavily leaning into the issue of education, specifically parents’ rights over school boards. Youngkin and his allies jumped into the nationwide debate that originally took off in the Loudoun County School district over critical race theory and transgender rights in schools, arguing that it was parents, not school boards, who ultimately get to decide what their children learn in the classroom. Last month, Youngkin hit the Loudoun County school board once again, calling for an investigation into the handling of two sexual assault allegations in two Loudoun schools this year.

Prior to Youngkin’s victory, Republicans suggested they would tout the parents’ rights message going into the midterms.