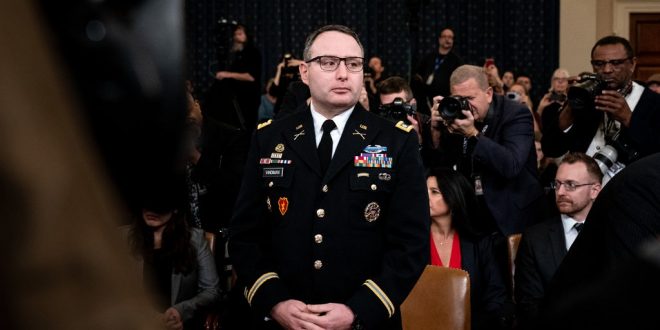 Lt. Col. Alexander Vindman, whose testimony in the House inquiry infuriated President Trump and his allies, will be reassigned within the military, officials said. “I’m not happy with him,” Trump said. Colonel

The White House on Friday fired Lt. Col. Alexander S. Vindman, whose testimony in the House impeachment hearings infuriated President Trump and his allies, escorting him out of the complex just days after the Senate trial ended in acquittal, his lawyer said.

“There is no question in the mind of any American why this man’s job is over, why this country now has one less soldier serving it at the White House,” David Pressman, the lawyer, said in a statement. “Lt. Col. Vindman was asked to leave for telling the truth. His honor, his commitment to right, frightened the powerful.”

Colonel Vindman’s twin brother, Yevgeny Vindman, also an Army lieutenant colonel who worked at the White House, was fired as well and escorted out at the same time, according to two people briefed on the developments.

The dismissal was foreshadowed earlier in the day when Mr. Trump essentially confirmed to reporters before leaving on a trip to North Carolina that Colonel Alexander Vindman would be pushed out. “Well, I’m not happy with him,” the president said of Colonel Vindman. “You think I’m supposed to be happy with him? I’m not.”

The president then reposted a Twitter message from a supporter advocating the colonel’s dismissal: “Vindman’s behavior is a scandal. He should be removed from the @RealDonaldTrump White House ASAP to protect our foreign policy from his machinations.”

Both brothers, whose tours at the White House were scheduled to last until July, will retain their Army ranks and now return to military service. Alexander Vindman, who had been expecting the move and had begun removing personal items, was told he will go to the Pentagon before moving to the National War College in July as originally planned, according to one person close to the situation. Yevgeny Vindman, who goes by Eugene, was more surprised and told he will report to the office of the Army general counsel.

The action comes just two days after Mr. Trump was acquitted in a Senate impeachment trial that turned in part on the testimony of Colonel Vindman and other administration officials who described a campaign to pressure Ukraine into announcing corruption investigations into former Vice President Joseph R. Biden Jr. and other Democrats.

Mr. Trump has made clear his personal antipathy for Colonel Vindman, who oversaw American policy toward Ukraine on the National Security Council staff. “Lieutenant Colonel Vindman and his twin brother, right?” the president said at one point during a rambling hourlong venting session at the White House on Thursday, his voice dripping with disdain. “We had some people that — really amazing.”

The decision to move Colonel Vindman out of the White House complex, reported previously by Bloomberg News and The Washington Post, came as Mr. Trump and his allies have made clear that they will seek to exact payback against those he blames for triggering his impeachment and trial. During his White House event, Mr. Trump denounced the “evil” and “corrupt” people who investigated him, and his spokeswoman went on television to declare that anyone who hurt the president “should pay for” it.

Speaker Nancy Pelosi, who orchestrated the House impeachment, said she was “stunned” to hear that Colonel Vindman would be pushed out of the White House. “That’s such a shame,” she told reporters. “What a patriotic person. This goes too far.”

Senator Chuck Schumer of New York, the Democratic leader, said that the Pentagon had assured him that whistle-blowers “like LTC Vindman” would be protected. “Any reprisals against him or others who came forward to tell the truth are wrong and should be seen for what they are: An extension of President Trump’s cover-up,” he wrote on Twitter.

At least one Republican joined the protest. Senator Susan Collins of Maine said witnesses should not be punished for giving the House required testimony. “I obviously am not in favor of any kind of retribution against anyone who came forward with evidence,” she said in Maine, according to the Portland Press Herald.

As of a few weeks ago, Colonel Vindman was still doing his day-to-day job of coordinating Ukraine policy with career officials at other agencies, but had been largely cut off from political appointees and had not yet met the new national security adviser, Robert C. O’Brien, who has been in the job since September, according to the person briefed on the plans.

Colonel Vindman, a Ukrainian immigrant and decorated Iraq war veteran, told the House Intelligence Committee in November that he was surprised when he heard Mr. Trump pressure President Volodymyr Zelensky of Ukraine to investigate Mr. Biden and a conspiracy theory involving Democrats and the 2016 election during a July 25 telephone call. He told lawmakers that he reported his concerns to other N.S.C. officials.

Republicans questioning his motivations during the hearing pointed to the fact that Ukrainian officials sounded him out about becoming the country’s defense minister, a suggestion he said he rejected and reported to his superiors.

Even before the hearing, Colonel Vindman was subjected to virulent attacks on his patriotism on Fox News and social media that caused concern for his personal safety. Mr. Trump called him a “Never Trumper,” a term the colonel rejected. Fox aired a segment in which commentators noted that Colonel Vindman was an immigrant “working inside the White House, apparently against the president’s interest,” suggesting that might amount to “espionage.”

Colonel Vindman made Mr. Trump and his allies even angrier when he wore his uniform at the televised hearing and made comments that seemed more political than the other witnesses. Donald Trump Jr., the president’s eldest son, called the colonel “a low level partisan bureaucrat and nothing more.”

The attacks resumed during the Senate trial last month. “Adam Schiff is hailing Alexander Vindman as an American patriot,” Senator Marsha Blackburn, Republican of Tennessee, wrote on Twitter during the trial, referring to the lead House manager prosecuting the case. “How patriotic is it to bad-mouth and ridicule our great nation in front of Russia, America’s greatest enemy?”

She posted another message a few hours later quoting a former commander about Colonel Vindman: “Do not let the uniform fool you. He is a political activist in uniform.” Mr. Trump retweeted the post.

Colonel Vindman’s lawyer fired back at what he called the senator’s “slander” and “cowardice,” saying his client would continue to “serve our country dutifully and with honor.”

With impeachment over, Mr. Trump is debating whether to make additional changes in the White House staff. Some of his advisers are encouraging him to part ways with his acting chief of staff, Mick Mulvaney; those advisers have pointed fingers at Mr. Mulvaney for his role in the freeze of the security aid to Ukraine that paved the way for the impeachment inquiry in the House. Mr. Mulvaney was ordered to freeze the aid by Mr. Trump, according to several administration officials.

Other advisers are telling Mr. Trump that he should wait to make major changes until after the election. Some advisers hope that Representative Mark Meadows, Republican from North Carolina, who is retiring, will join the White House as a senior adviser, though not as chief of staff. Mr. Meadows was traveling with Mr. Trump on Air Force One to North Carolina on Friday.

Charles Igbinidu is a Public Relations practitioner in Lagos, Nigeria
@https://twitter.com/ionigeria
Previous Not Guilty: Split Senate acquits Trump of impeachment
Next Democrats fight over who is best able to beat a newly emboldened President Trump