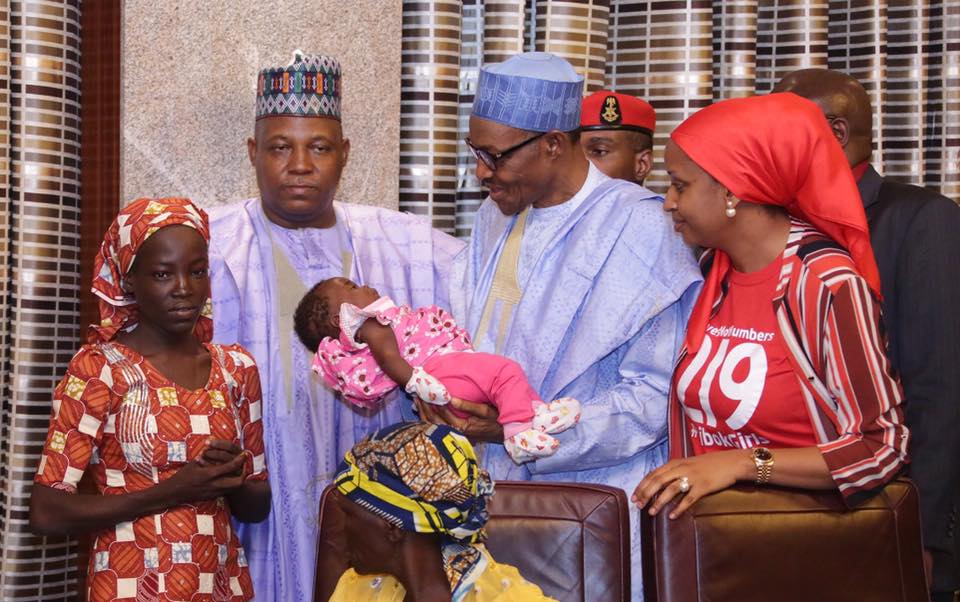 President Muhammadu Buhari on Thursday said there was fresh hope for the recovery of 218 Chibok schoolgirls abducted by Boko Haram more than two years ago, as he met the first student to be found.

Amina Ali, 19, who was discovered by civilian vigilantes and troops on Tuesday, and her mother, Binta, flew to the capital, Abuja, to meet the president at his official Aso Rock residence.

Buhari said afterwards he was “delighted” at her release but his “feelings are tinged with deep sadness at the horrors the young girl has had to go through at such an early stage in her life”.

He added: “Although we cannot do anything to reverse the horrors of her past, (the) federal government will do everything possible to ensure that the rest of her life takes a completely different course.”

The government was doing “all it can to rescue the remaining Chibok girls,” he said, adding: “Amina’s rescue gives us new hope, and offers a unique opportunity for vital information.”

Amina’s mother said in a statement she was “thankful to God and thankful to everyone that participated in the rescue and recovery”. 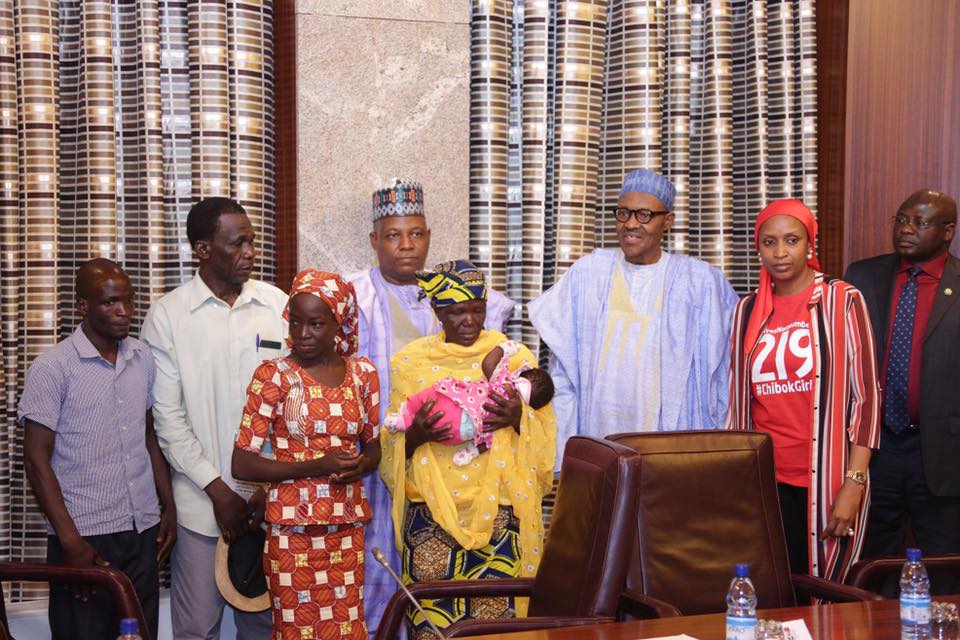 Boko Haram fighters seized 276 girls from the Government Girls Secondary School in the remote Borno state town of Chibok on April 14, 2014. Fifty-seven escaped in the hours that followed.

The abduction provoked global outrage and brought worldwide attention to the conflict but until Amina’s release, there were few indications of the girls’ whereabouts or possible release.

Community leaders said she told her relatives at a brief reunion at the family home in Mbalala, near Chibok, that most of the girls were still being held in Boko Haram’s Sambisa Forest enclave.

But Amina was quoted as saying that “six were already dead”.

Nigeria’s military has been conducting operations in the former game reserve for weeks in the hope of flushing out militants and destroying Islamist camps in the sprawling semi-desert scrubland.

The abducted girls have long been thought to have been taken to the forest. Satellite imagery provided by the United States and Britain reportedly identified the location of some of the students.

But Nigeria’s military failed to act on the intelligence, Britain’s former ambassador to Nigeria has claimed.

Former president Goodluck Jonathan’s delayed response to the abduction and overall handling of the insurgency was seen as a major factor in his election defeat to Buhari last year.

Amina was brought to the Borno state capital, Maiduguri, by air force helicopter from Damboa 90 kilometres (56 miles) away with her four-month-old baby and a man she said was her husband.

In photographs released by the military, she appeared tired and thin, as she held the baby, named Safiya, in her arms and apparently received medical care.

In another, her purported husband, identified by the army as “suspected Boko Haram terrorist” Mohammed Hayatu, cradled the infant on a hospital bed.

The army said he was “undergoing further investigation at (the) Joint Intelligence Centre” and was being “well-treated”.

Boko Haram has used kidnapping as a weapon of war in the conflict, which has killed at least 20,000 people, forced 2.6 million from their homes and devastated the northeast since 2009.

Young women and girls have been forced to marry rebel fighters, becoming sex slaves and even suicide bombers in the group’s campaign for a hardline Islamic state.

Men and boys have also been seized and forcibly conscripted.

Boko Haram is thought to have kidnapped several thousand women and young girls but there have been calls for Nigeria to do more to support former hostages.

Buhari said Amina would receive “the best care the Nigerian government can afford” and disclosed she had undergone medical tests for about five hours and met Unicef trauma experts.

The resumption of her education would be “a priority”, he added. “Every girl has the right to an education and a life choice,” he said.

Francisca Vigaud-Walsh, from Refugees International (RI) said earlier such specialised care was not available to most former hostages.

“On the contrary there is a seemingly arbitrary and haphazard approach to dealing with these women and girls,” she said.

RI and other agencies have highlighted in particular the lack of facilities for victims of sexual violence and psychological services.

Northern Nigeria, which is largely Muslim, is deeply conservative and kidnap victims have reportedly been shunned on their return home.

UN rights experts said in January there was an “urgent and pressing need for effective measures to address stigma, ostracism and rejection of women and children” because of their abduction.

Charles Igbinidu is a Public Relations practitioner in Lagos, Nigeria
@https://twitter.com/ionigeria
Previous Update: EgyptAir plane crashes into the sea, No Nigerian on-board
Next Lagos Police to Charge Lekan Shonde for Murder of wife