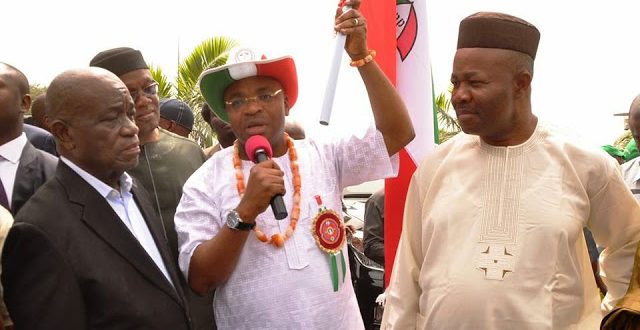 The Former Governor of Akwa Ibom state and the Senate Minority Leader, Senator Godswill Akpabio, in a meeting held on Monday to review the ongoing onslaught against him by his Successor told his Annang cabal that the greatest mistake he has made in his life was to have made Udom Emmanuel his successor in 2015 against all odds and warnings by some well meaning people within and outside the state.

“I regretted that I am being mocked by those I bulldozed in the build up to the 2015 polls to make Udom Emmanuel my Successor” he said
He vowed to take Udom pound of flesh at the 2019 polls. He told his Annang brothers that, “sacking Sir Etekamba Umoren as the SSG, Governor Udom has crossed the red line and has dared me”.

Attendees of the meeting blamed the former Governor for not hearkening to the voice of reason in the choice of his successor and regretted that the government has been hijacked by those who never contributed anything to its emergence while those that staked so much to ensure the success of 2015 agenda were pushed out of the government simply because they are identified as Akpabio boys.

The meeting expressed shock that the governor could sponsor, direct and encourage people to launch media attacks on his person.
Those who attended the meeting were carefully selected and they reaffirmed their support for their leader and resolved to follow him wherever he would lead them in 2019