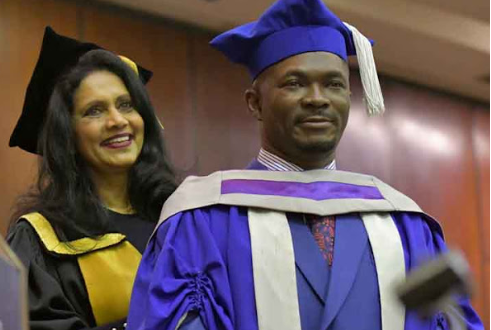 A Nigerian man has been conferred with a doctorate 6 years after he was homeless and hopeless in UWC/Oklahoma State University in the United States.

Emmanuel Ilori arrived in Cape Town from Nigeria in 2012 expecting to be met by a “travel agent” recommended by a friend. Ilori had sent the agent money for his fees and accommodation at the University of the Western Cape. But it turned out the man was a fraud.

Ilori had no money left to return to Nigeria and also none to start a new life in South Africa. He also had nowhere to stay and was stranded. A church took pity on him and allowed him to sleep in a Sunday school room while he found work as a security guard.

Today, Ilori has been conferred with a doctorate in public administration at UWC‚ where he is an associate lecturer in the school of government‚ economics and management sciences.

I wasn’t going to ask my parents for money‚ because I left there with a commitment to my dad not to worry about me financially.

‘Tough times don’t last‚ but tough men do’‚ is what my dad used to teach me‚ and I often held on to those words.

Eventually, Ilori swallowed his pride and raised money from extended family in Nigeria‚ registering late for his honours degree in business‚ and later in 2012 he took part in the UWC/Oklahoma State University exchange programme‚ assisting young people in Khayelitsha and Gugulethu.

I taught and mentored new businesses in entrepreneurship development‚ skills development and capacity building‚ he said.

He travelled by rail throughout his honours programme‚ often sleeping in the UWC library because he missed the last train. After graduating‚ he enrolled for a master’s degree‚ and began studying towards his PhD in 2015.

In 2016‚ he spent seven months at the University of the West Timisoara‚ Romania‚ as a result of which UWC now has an exchange programme with the institution.

UWC made me who I am today. The calibre of lecturers and resources impacted my knowledge and development.

The lecturers here are passionate about the development of students and they have a positive impact on them. They encourage the belief that you will make it with education; being educated means that you’re well-informed.

Ilori’s doctorate was one of 44 conferred on Monday.