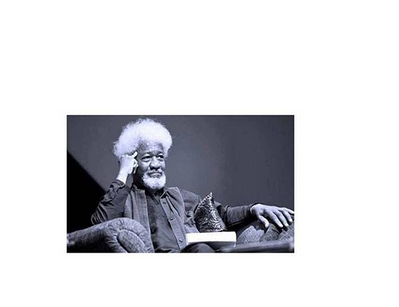 Wole Soyinka, Nobel laureate, says he should be examined by a psychiatrist if he joins the Coalition for Nigeria Movement (CNM) masterminded by ex-President Olusegun Obasanjo.
Obasanjo recommended the coalition in a letter he wrote to Pres. Buhari in January, where he asked Nigerians to rally round the movement, saying neither APC nor PDP could give Nigeria the leadership it deserves.

But speaking in an interview with BBC Yoruba, Soyinka said the coalition is not meant for someone like him. “Me? Obasanjo would establish a group and I will become a member of such group? That means they should get a psychiatrist to examine me,” Soyinka said.

He also spoke about the letters which Obasanjo and former military President Ibrahim Babangida addressed to Buhari. Soyinka said people should get suspicious “when these soldiers speak” because there is the possibility that “what they have in mind is different from what we have in mind”.

The scholar said nonetheless, the content of the message should be examined even though the messengers are not trustworthy.

Previous Trump Calls Oprah Insecure, Wants Her To Run ” So She Can Be Exposed”
Next Banters In Lagos, Poverty And Disease In The Niger Delta