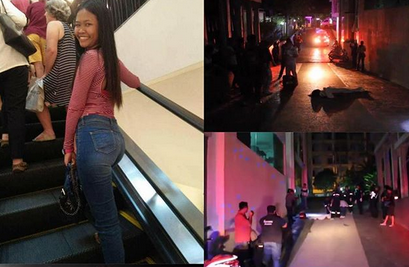 Prostitute Falls To Her Death During Sex On Balcony

A 25-year-old British tourist identified as Reece Vella, has been arrested over the death of a Thai hooker Wannipa Janhuathon, 26, who plunged five floors to her death as they had “strange and extravagant” sex on a balcony of Saturday morning in Pattaya, Thailand.
The prostitute suffered severe head injuries and multiple fractures after falling naked along with a half-empty packet of sex drugs from an apartment in the notorious tourist resort.

Police searched the empty room – finding clothes and used condoms. Vella arrived in Thailand between three and four months ago.
Police Lieutenant Narong Chantra, deputy head of investigations at Pattaya Police, said Vella had been arrested on suspicion of “negligence causing others to die” and fled the scene in panic knowing that he was staying in the country illegally on an expired visa.

Previous Woman Slams Her Husband’s Side Chick, Her Brother -In-Law Supports Side Chick
Next 2 Of 4 Yahoo Boys Who Killed Their Grandma For Rituals, Arrested