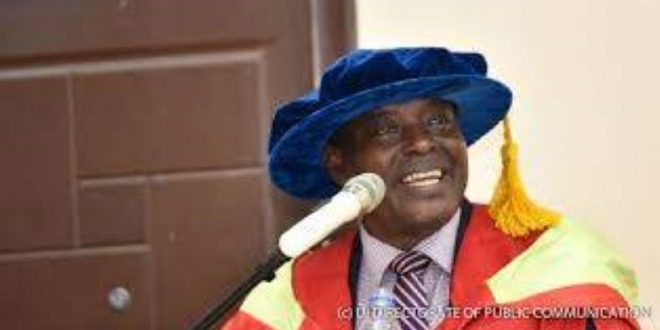 Prof. Osaghae confirms Governor Obaseki was his Classmate at University of Ibadan

Professor Eghosa Osaghae has disclosed that Governor Godwin Obaseki of Edo State was his classmate at the University of Ibadan and that they were admitted in 1976 and graduated in 1979.

The publisher of ionigeria.com Charles Igbinidu made a phone call to the professor to confirm a statement circulating on WhatsApp which was attributed to him.

Not only did Professor Osaghae admit that he was the author, he also gave ionigeria.com approval to publish the statement which also copiously explained the modes of admission to the University of Ibadan prior to the introduction of Joint Admission and Matriculation Board (JAMB) in 1978.

It will also be recalled that the University of Ibadan has issued a statement affirming that Governor Obaseki was a graduate of the institution.

Let us clear this mess once and for all. I entered the University of Ibadan in 1976, the same year as HE Godwin Obaseki.

We were both from Eghosa Anglican Grammar School, where he finished one year ahead of me in 1973 (I left in 1974).

Mr Ogbe Oviasu, also from the 1973 set, was the third person to enter UI that year from Eghosa. Chico Omere, also 1973 Eghosa, was the fourth, but he was in the Prelim class.

I attended Edo College for the H.Sc, and I know that Obaseki was at the Centre for Continuing Education (now Institute for Continuing Education) which was quite popular for Advanced Level tuition those days. Obaseki was admitted to read Classics, Oviasu, History (both in the Faculty of Arts) and I, Political Science (in the Faculty of the Social Sciences).

In both faculties, all undergraduate courses were three-year courses, as the university offered preliminary courses only in the sciences, agric, technology, and medicine (preliminary or pre-degree courses for arts and social sciences were offered in the Jos campus of UI, which became the University of Jos in 1975). Up until 1978 when JAMB was established, Nigerian universities had two modes of entry (applications were made to individual universities, and many of us had multiple admissions).

The first was the concessional entrance mode by which students were admitted to preliminary classes, which were in effect, pre-degree classes (at Ibadan, prelim classes were sub-100 level and were taken as qualifiers for entry into degree programmes).

For this mode of entry, a minimum of 5 WASC/O/L credits was required in addition to passing the concessional entrance examination set by individual universities.

The second mode was direct entry (direct literally because you were admitted to 100 level unlike prelims which were pre-degree and sub-100 level).

For direct entry admissions, a minimum of 2 H.Sc/A/L passes in Principal subjects was required, in addition to WASC credits in proper combinations. Many of us had 5 WASC credits, but this was not a requirement.

Three WASC credits, and two H.Sc principal passes got you admission (admission was based on a points system that was calculated on the basis of WASC and H.Sc papers).

A credit in English was also required but an H.Sc O pass grade was accepted in lieu of English.

A credit in Mathematics was also not a requirement in the faculty of Arts (in the social sciences, 1976 was the last year students without credit in mathematics were admitted- this was done apparently to accommodate hundreds of students from the Jos campus who opted to continue with UI rather than the new University of Jos).

These were the requirements for admission at the time, and are not to be confused with requirements that came with JAMB and now govern admissions. I should add that universities in the north accepted pre-degree and schools of preliminary studies/IJMB passes in lieu of WASC and H.Sc papers.

Governor Obaseki was my classmate at Ibadan and we took some mutual courses in History and Philosophy during the 3-year programmes. He was in Nnamdi Azikiwe hall, Oviasu was in Tedder, and Omere and I were in Independence hall.

Other Eghosa students at Ibadan at the time included Professor Larry Edosomwan (Agric) and Mr Duke Osunbor (Forestry) who both graduated in 1978.

We graduated in 1979. I know so much about Obaseki because we grew up in the same neighborhood in New Benin (those ties are for life), attended the same schools, and belonged to the same church (St Peter’s Anglican Church, Lagos Street, Benin City).

He attended UI and graduated with an Honours degree in Classics in 1979, the same year I graduated in Political Science (and Ogbe Oviasu in History).

I hope this messy matter can be finally laid to rest.