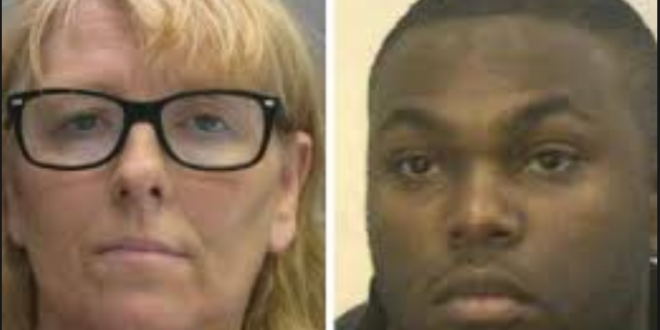 A prison teacher who had sex with an inmate serving life for murdering two teenage girls with a machine gun has been jailed for two years. Samantha Drinkwater, 49, was caught on camera committing “a number of sexual acts” with Michael Gregory, 35.

Drinkwater was employed by People Plus, an employment support and training services firm, at the time of their affair between 2015 and 2017.

She had given prison bosses assurances that she would try to avoid contact with Gregory after concerns about their relationship were raised.

But when covert surveillance cameras were put in her office last year the couple were filmed performing sexual acts.

When Drinkwater was arrested, cannabis, a small, Nokia mobile phone and four miniature bottles of whisky were discovered in her car.

A search of her home also uncovered a notebook with doodles detailing their relationship and a number of electrical items, including SD cards.

Detectives found text conversations between her and another person who she later admitted was Gregory.

At ­Peterborough crown court Drinkwater, of Ramsey, Cambs, admitted misconduct in a public office, possession of cannabis with intent to supply, and conveyance of an SD card into a prison.

Jailing her for two years, Judge Matthew Lowe told Drinkwater she had acted “like a love struck teenager”.

Judge Lowe said Gregory had “manipulated and exploited” Drinkwater, but told her: “That does not amount to an excuse or justification for what you did.”