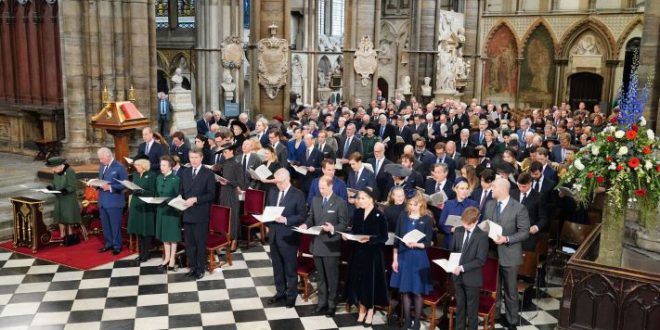 That image of our masked Queen at the Duke of Edinburgh’s funeral last April, sitting isolated in St George’s Chapel at Windsor Castle just hours after she had said a final, private goodbye to her husband of 73 years, has engraved itself into national memory.

She seemed to shrink before our eyes as the coffin of her childhood crush, the boy she admitted she admired for his “Viking” blond good looks, who won her teenage heart at 13, who called her ‘Cabbage’ and ‘Lilibet’ and always made her giggle, was lowered out of sight.

So what a contrast today, to see her in Edinburgh green, flanked by three generations of her closest family, at a Service of Thanksgiving for her trusted Consort and best friend.

While the skies were an uninspiring leaden grey, a far cry from the brilliant blue that dazzled at his funeral, this was the truly fitting, uplifting, commemorative event the Queen had been waiting for. And importantly, the event the precise Duke himself had wanted and planned.

Last year, just 30 mourners could attend the funeral for the Duke, and his carefully drawn-up inventory – codenamed Forth Bridge – had to be drastically reduced.

Today, during a 40-minute service, all his remaining wishes could be fulfilled, and within the iconic central London Abbey which meant so much to the couple.

Because it was under its towering, Gothic arches, 75 years ago this November, the Duke and the Queen married – under similarly grey skies. Where the young princess promised to ‘obey’ knowing full well she would one day be Queen.

And it was here too, Prince Philip pledged his allegiance to her as her “liege man of life and limb” at her Coronation in 1953.

The Queen leaves the Thanksgiving Service for the Duke Of Edinburgh at Westminster Abbey ( Image: Getty Images)

Those memories must have drifted in and out of the Queen’s memory today, as she sat stock still.

While the service dwelt mainly on the Duke’s work and dedication to his causes, there was still room for her to nod to their personal relationship.

Amid the grand floral tributes in red, white and blue, including blue eryngium, known as sea holly, a symbol of his love of the sea, smaller posies included white dendrobium orchids, which appeared in Princess Elizabeth’s wedding bouquet.

She also wore a yellow gold, ruby and diamond scarab brooch, which was a personal gift from Philip in 1966.

The Very Reverend Dr David Hoyle, Dean of Westminster, alluded to the significance of the Abbey at the start of the Bidding.

“In Westminster Abbey, where he made promises that defined a life of willing duty and spirited service, we give thanks for His Royal Highness The Prince Philip, Duke of Edinburgh,” he said.

“A man of rare ability and distinction, rightly honoured and celebrated, he ever directed our attention away from himself. He put privilege to work and understood his rank as a spur to service.

“Working at pace, with so many claims on his attention, he encouraged us to focus, as he was focussed, on the things that matter.”

Although the Queen is reported to have had a large hand in the service, many requests were the Duke’s.

Front and centre was his beloved Duke of Edinburgh Award scheme.

Gold medal holders, alongside members of the youth UK Cadet Force associations – he was Colonel-in-Chief of the Army Cadet Force since 1953 – lined the steps of Westminster Abbey at his wish.

And the tribute was given by Doyin Sonibare, a gold medal holder.

At 15, from East London, she had never even been camping before.

Climbing a mountain, she thought she would fall, but a friend told her: “You are not going to fall and if you do, I’m right behind you.” That is exactly the spirit and confidence the Duke wanted to foster.

The Queen is helped into a car by Prince Andrew ( Image: REUTERS)

The award helped her get her first job.

“In 1956, when The Duke of Edinburgh created the Award, he had a vision to create a programme which supported the development of young people all over the world,” she said.

The Queen smiled, and on her way out at the end of the service, paused, leaning on her cane, to thank Doyin.

“She thanked me for my speech – she was lovely, really kind,” said Ms Sonibare, 28, from Ilford, east London.

The Band of Her Majesty’s Royal Marines Portsmouth played, while the Duke had chosen Te Deum in C by Benjamin Britten for the choir to sing, and they did movingly, their voices soaring like flutes.

At his funeral, singing was sadly restricted under Covid rules.

The roof was lifted today.

He had also chosen the rousing hymn Guide Me, O Thou Great Redeemer.

Like the first hymn, Monk’s Gate, its lyrics alluded to pilgrims.

“I’ll fear not what men say, I’ll labour night and day to be a pilgrim,” we sang.

The essence of the message was the Duke’s decades-long dedication to his pilgrimage through life, learning as much as he could, always ready to re-learn or embrace a new challenge.

While, at the Duke’s wish, clergy from the estates he oversaw in Windsor, Sandringham and Balmoral read special prayers, praising his “devotion to family”, “spirit of adventure”, “work with the young”, and “work in conservation and good stewardship of the environment”, it was The Right Reverend David Conner, Dean of Windsor, who best summed this up.

He also gave the most personal insight into the man.

He talked of the “intriguing and attractive mix that went to make up the personality of Prince Philip, Duke of Edinburgh.”

While describing him as a man of unshowy but “heartfelt faith”, and referencing his “astonishing intellectual and physical energy, his enormous capacity for sheer hard work”, he conceded: “He would hate to think that I should paint a picture of him as a ‘plaster saint’.”

While he served and sacrificed, he said, and was “working for a kinder future” – at which point his grandson, Prince William, looked up to the arches in contemplation – “he could be somewhat sharp in pricking what he thought to be bubbles of pomposity or sycophancy.”

The remark prompted a giggle from his granddaughter Princess Beatrice, earlier overcome by tears.

“On the other hand,” he added, “we should not forget that he himself was sometimes wounded by being unfairly criticised or misunderstood.”

The Duke had more than 50 godchildren and one, Elizabeth Grubb, flew from New Zealand today to attend.

Her father served with Philip in the Royal Navy, an establishment he adored.

She said: “It was a beautiful service and, I think, just right.

“I think he would have been pleased, wherever he is.”

Charles Igbinidu is a Public Relations practitioner in Lagos, Nigeria
@https://twitter.com/ionigeria
Previous Nigeria miss out of Qatar 2022 World Cup after 1-1 draw with Ghana
Next Russian Forces Driven Away From Kyiv as Ukraine Regains Territory and Kills Top Commander