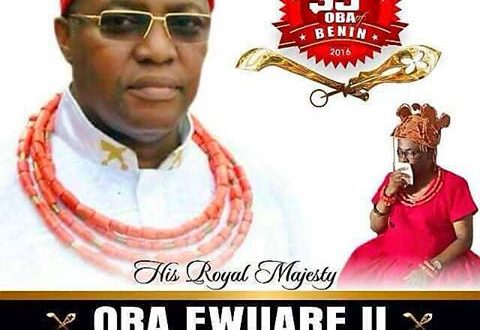 Prince Eheneden Erediauwa, the eldest son of immediate past Oba of Benin who was crowned as the 39th Oba of Benin Kingdom on Thursday morning but received his staff of office from Governor Adams Oshiomhole later in the day has chosen the name Ewuare II.

The new Oba was crowned at about 2am on Thursday by the Usama N’ Ihiron also known as the Edion led by Chief Oliha.

The crowning was done at a private ceremony inside the Usama Palace, a temporary building erected for the coronation ceremony.

Although, he chose the name on Tuesday but it was kept secret until he was presented to the public at Urhokpota hall.

After being crowned at Usama palace on Siluko road, he proceeded to Urho-Okpota. He was accompanied by several Benin chiefs, the Ekassa group, the Isenwenro group and other traditional societies and groups.

He was greeted by cheers from thousands of residents and visitors, some of whom were heard shouting, “Oba ghator kpere…Ise! (long may the king live)”.

He also crossed the historical bridge at Isekherhe and performed other coronation rites, before making his way to Urho-Okpota.

Ewuare 1 (also Ewuare the Great) was the Oba of Benin Kingdom from 1440 until 1473. Ewuare was said to have become king in a violent coup against his brother Uwaifiokun which destroyed much of Benin City.

After the war, Ewuare rebuilt much of the city of Benin, reformed political structures in the kingdom, greatly expanded the territory of the kingdom, and fostered the arts and festivals.

The coronation event was attended by many dignitaries including Vice President Yemi Osinbajo, who represented President Muhammadu Buhari.