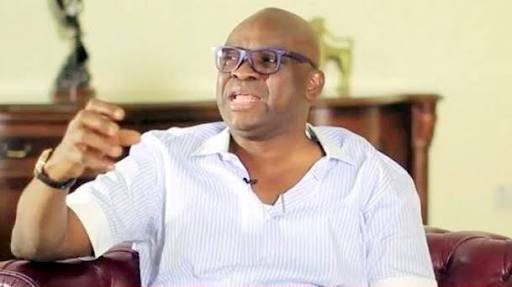 The crisis rocking the Ekiti state chapter of the Peoples Democratic Party(PDP) took another turn on Thursday as the former Minister of Works, Prince Dayo Adeyeye , resigned as Pro-Chancellor and Chairman of the Governing Council of the Ekiti State University, Ado Ekiti.

Adeyeye, who confirmed his resignation during a telephone conversation with newsmen in Ado-Ekiti, did not disclose why he took the drastic action, but some of his close political associates said the move became necessary in order to pre-empt Governor Fayose’s plan from sacking him over controversy surrounding the emergence of the governor’s deputy, Prof Kolapo Olusola as the PDP sole governorship candidate for the 2018 election .

some pro-Fayose allies in the state chapter of the PDP, who were described as critical stakeholders had on Wednesday adopted Olusola as the sole candidate at a meeting held at the government house pavilion in the state capital.

When called to react to Adeyeye’s action, Fayose’s Special Assistant on Public Communications, Mr. Lere Olayinka, said only the university’s management can react to the development.

“When a pro-chancellor is appointed, he becomes autonomous, because the university itself is autonomous , so we can’t comment on this”, Olayinka said.

Adeyeye decided to sever his political ties ways with Fayose over the governor’s endorsement of his deputy as the sole candidate for the impending poll.
The action had foreclosed the aspirations of Adeyeye and other aspirants, including former deputy governor Sikiru Lawal, former

Adeyeye, in a statement by Ilori Ojo of the Prince Adedayo Adeyeye Movement (PAAM), described Fayose’s action as a breach of the PDP’s constitution and the provisions of the Electoral Act (as amended).
“See Sections 50 (1), Section 50(2) and 50(2b) of the PDP constitution (2012)as amended.

“It is important to note that PDP as a political party is bigger and larger than an individual no matter how highly placed he or she may be as to override the rules and regulations of the party which are sacrosanct in the election of any candidate for elective position.
“I reject the purported adoption of a sole candidate in its entirety as there are many other aspirants for the governorship race in 2018”, he said.

This is just as the Ekiti State Government has accepted the resignation of Prince Dayo
Adeyeye as Chairman, Governing Council of the Ekiti State University, Ado Ekiti (EKSU).

According to a statement signed by the Secretary to the State Government, Dr (Mrs) Modupe Alade, the government thanked Adeyeye for his contributions to the university and wished him well in his future
endeavours.

Previous How ritual killers slaughtered student for N10m
Next EFCC Arrests Its Own Driver, Policeman For Burgling Sealed Mansion Owned By Alex Badeh