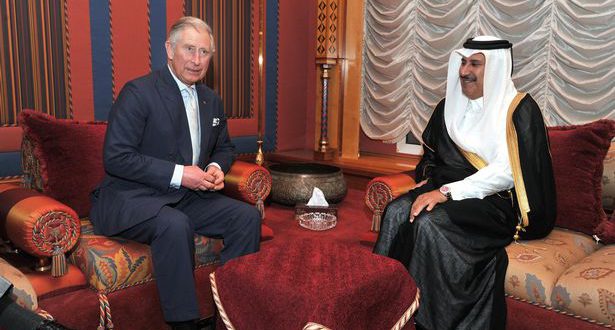 The Prince of Wales Prince Charles is alleged to have personally received the cash €500 notes from Sheikh Hamad bin Jassim bin Jaber Al Thani, who was the prime minister of Qatar between 2011 and 2015

Prince Charles allegedly accepted more than €3million in cash donations from an ex-PM of Qatar – including €1million in a suitcase.

Sheikh Hamad bin Jassim bin Jaber Al Thani is said to have handed banknotes over in meetings between 2011 and 2015.

The astonishing revelations came as the Prince of Wales sought to make amends for the UK’s human rights record by announcing a national day of remembrance for victims of the British slave trade.

Ironically, Qatar has long been questioned over its own human rights record.

The €1million in a suitcase was said to have been handed over during a meeting at Clarence House. On another occasion, cash was stuffed into carrier bags from upmarket London store Fortnum and Mason, the Sunday Times reported.

The newspaper said the money was given in €500 notes – a now discontinued denomination dubbed the “Bin Laden” for its links to terrorist financing.

Clarence House insisted the money was “passed immediately to one of the prince’s charities who carried out the appropriate covenants and assured us all correct procedures were followed”.

The charity in question is the Prince of Wales’ Charitable Fund. It is understood that at least one trustee had no knowledge of the funds.

In addition, none of Charles’ meetings with Al Thani appears on the Court Circular record of royal engagements.

The Qatari connection will raise eyebrows. It is illegal to be gay in the Arab state and women are heavily discriminated against. The country hosts the World Cup this year amid claims from Amnesty International that 6,500 migrant workers died in construction schemes. Qatar contests the figures.

News of the cash transactions took the shine off Charles’ groundbreaking call for a national day of remembrance to the millions forced into slavery.

A source close to the prince said it could be similar to Holocaust Memorial Day and Charles is stepping up efforts with community leaders to make it happen.

The source said: “The Holocaust was appalling and dreadful and just as we have acknowledged the horrors of the past, the prince believes there should be an equal acknowledgement of our past in the slave trade.

“Britain is made up of a very diverse population and the same can be said of the Commonwealth. The Prince of Wales is looking for more opportunities to celebrate those different aspects of the collective.

“We have gained a greater understanding of the Holocaust, so it is acknowledged and learnt at a national level, but that is not true of the slave trade. The prince has acknowledged that it needs to happen and if there is a movement to back that, the Prince of Wales will certainly lend his support.”

In a speech to Commonwealth leaders in Rwanda on Friday, Charles, 73, described his regret that Britain shipped African slaves to the US. He said:

“I cannot describe the depths of my personal sorrow at the suffering of so many.

“I want to acknowledge that the roots of our contemporary association run deep into the most painful period of our history. Many of those wrongs belong to an earlier age with different – in some ways lesser – values.

“By working together, we are building a new and enduring friendship.” The memorial day move comes after PR disasters involving the royals in the Caribbean.

In March, pictures from Jamaica showed the Duke and Duchess of Cambridge touching the fingers of local kids through a wire fence.

Their use of a Land Rover ridden by the Queen on a visit in the 1960s was likened to colonialism.

Last year, Charles’ visit to Barbados ahead of a republican handover was overshadowed by locals who called his appearance “an insult” and demanded reparations. David Denny, who led the Barbados protests, last night repeated a call for reparations and reacted to Charles’ memorial day plan.

He said: “I am happy that he’s made the suggestion, but a call like that should come from the African people themselves. He doesn’t have the right to determine a day for African people.”

Meanwhile, Charles, yesterday announced he was commissioning portraits of Windrush pioneers and will host and attend events to mark 75 years since the 1948 arrival of immigrants from the Caribbean.

Charles said: “The Windrush vessel arrived at Tilbury in the year I was born, inspiring a generation who made this country home. This generation has made an immeasurable contribution to the society we share. That is why I wanted to pay my own heartfelt tribute to the role they have played.”

Charles Igbinidu is a Public Relations practitioner in Lagos, Nigeria
@https://twitter.com/ionigeria
Previous Picking Atiku As My Running Mate Was A Mistake – Obasanjo
Next Furious Man Utd tells Cristiano Ronaldo he is not for sale after Chelsea transfer talks