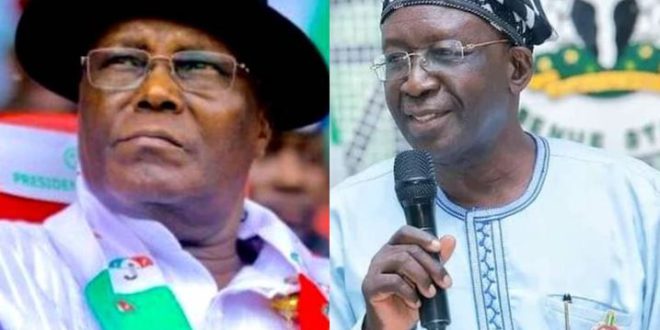 Presidential Ticket: “Mr. Vice President, I will not work for you as an aspirant”, Ayu Tells Atiku

The National Chairman of the Peoples Democratic Party, (PDP) Dr. Iyorchia Ayu, has told former Vice President Atiku Abubakar that even though they are friends, he will not work for him as an aspirant.

Ayu, who was addressing members of the National Working Committee, (NWC) and the campaign team of the former Vice President after a visit to the party Secretariat said, “Let me acknowledge the fact that you and I have been close personal friends for more than 30 years as it was indicated, we were key players in the Social Democratic Party and key players in the emergence of Chief MKO Abiola.

“So you are a presidential aspirant today. But I want people to know that you are still my friend. I can’t deny you I never deny my friends including those who are in the other disastrous party. You know them because even there we have common friends who miss the road, who normally should be here with us.

“More importantly, since we formed this party as you have mentioned, we have worked together in various capacities. It is you and I that plotted the emergence of President Obasanjo. An administration that did very well, putting Nigeria, on a healthy map economically, socially, and politically.

“Again, I can’t deny the fact that we work together harmoniously, whether political issues or economic issues, and on the National Security Council when I was Minister for internal affairs.

“I’m saying this to make it clear that those who say Oh, because of my personal relationship with you, as chairman, I’ll work for you. Mr. Vice President, I will not work for you as an aspirant. I will work for all the 17 aspirants. It is left to you to convince the delegates of our party that you are the best.

“You have to market yourself, you have to work hard. This National Working Committee for now we remain an umpire. We are not going to take side with any particular aspirants. But we love you all. I’ve said repeatedly that each one of you given the opportunity will run this country better than what APC has done or will be able to do.”