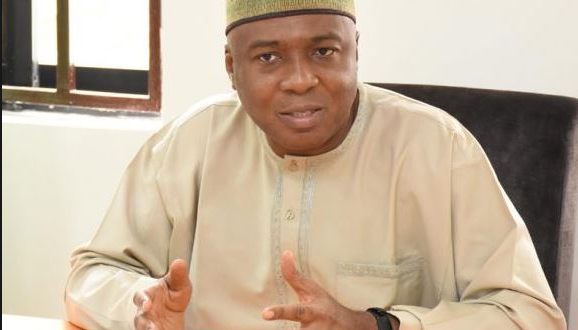 Presidential Election 2019: “I Believe I Can Make The Change” – Bukola Saraki

Senate President Bukola Saraki has confirmed rumors that he will be running for president in 2019. Saraki who defected from APC toPDP a few weeks ago, confirmed this in an interview with Bloomberg.

“I am consulting and actively considering it. I believe I can make the change.” he said during the interview conducted in his apartment in Abuja

Saraki said that if he decides to run, it would be under the banner of the People’s Democratic Party, the main opposition group whose presidential primaries is slated for October.

Making reference to last Tuesday Augut 7th’s invasion by the DSS, Saraki said that singular action showed that Nigeria’s democracy is in danger and needed to be salvaged.

“If a government can go and lock up an arm of government — and it’s never happened in our history — we should all be very concerned. We should not be surprised that they would use security agencies for elections.” Saraki said

Saraki added that Nigeria needs to be governed by a genuinely pro-business administration that will be able to tackle recurrent security issues.

”The PDP has learnt its lesson from the loss in 2015, and I think unfortunately the APC did not learn from their victory. While negotiating with the PDP, we listed a number of issues. We talked about how to sustain and improve the fight against corruption; the issue of providing more powers to the states; inclusion and having a more nationalistic approach on things we do; to continue to improve the environment that will ensure investments. We listed a number of items during the discussions with the PDP, and there is a written agreement to that. We trust that we can hold them to that. We would ensure that the party is strong on security. The APC too have not done well on the issue of security. We have the opportunity with the right kind of presidential candidate and president to provide the leadership for the party. The party has a good opportunity to lead the country in the right direction.”