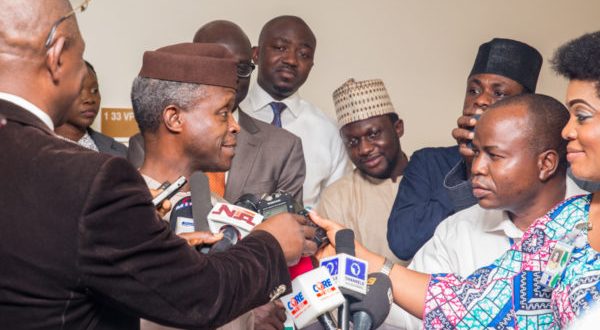 The Acting President, Prof. Yemi Osinbajo, on Monday disclosed that he spoke with President Muhammadu Buhari earlier in the day, on phone , to update him about developments regarding the 2017 Budget and the protests embarked upon by some Nigerians.

He said the president would soon return home.

Osinbajo, who spoke with State House correspondents shortly after meeting behind closed doors with the National Chairman of the All Progressives Congress, APC, Chief John Odigie-Oyegun, said he was not in any way under pressure to resign.

He pointed out that he ran on the same electoral ticket with President Muhammadu Buhari in 2015.

The meeting, which took place at the Presidential Villa, was also attended by the President’s Special Adviser on Political Matters, Sen. Babafemi Ojudu and the Special Assistant to the President on Diaspora Matters, Hon. Abike Dabiri-Erewa.

Osinbajo said President Buhari would return to Nigeria as soon as he completes the necessary tests recommended by his doctors in London.

According to Osinbajo, “Let me first say the President is hale and hearty. I spoke to him just this afternoon and we had a fairly long conversation, he is in good shape and very chatty.’’

The acting President said his conversation with Buhari was focused on the economy and the goings on in the country.

He said President Buhari was “interested in knowing about the budget process and how far we had gone’’, especially with efforts aimed at taking the country out of recession.

“And I of course informed him of what we are seeing, of the protest marches and some of what the feedback is, what people are saying about the economy and all of that,’’ Osinbajo added.

On when the President would return to Nigeria and his present health status, Osinbajo said “just as he has said in his letter to the National Assembly, he needs to go through a cycle

of tests and once the test results are seen, he will receive medical advice, we should expect him very soon.’’

Osinbajo insisted that “the health status of Mr President is an issue that only Mr President himself will be able to discuss at the appropriate time. Again, he is running tests.

“Before you determine your health status, you must be able to run the necessary tests. I must have done the tests and do what my doctors have asked me to do and am sure I must await the outcome of that before I talk about any kind of status.’’

Osinbajo dismissed insinuations that he was under pressure to resign on account of the President’s health status.

The presidency had earlier released a statement on the request for an extension of President Buhari’s vacation to enable him complete his treatment in London.