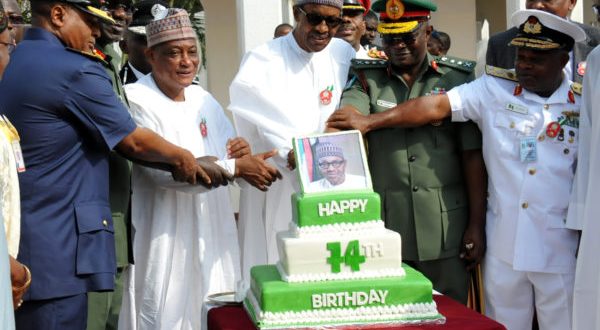 President Muhammadu Buhari on Saturday marked his 74th birthday anniversary with a special birthday parade and inspection of the Guard of Honour mounted by the Nigerian Army.

The low-key event, which took place at the fore-court of the Presidential Villa, Abuja, witnessed the Inspection of Guard by the president.

President Buhari also cut a cake and released 74 pigeons from a cage as part of the activities marking the anniversary.

where he wrote: “I am impressed with the special drills presented by the Guard Brigade.’’

The Chief of Defence Staff, Gabriel Olonishakin, who briefly spoke with State House correspondents, congratulated the president on his 74th anniversary.

He said: “We are celebrating with the President and we wish him well and good health.

“We wish him all the goodness of God as he pilots the affairs of our nation to greater heights.’’

The Chief of Army Staff, Tukur Buratai, who also spoke to the correspondents, described President Buhari as “a great man and we are very pleased with his accomplishments over the years.

I found this interesting