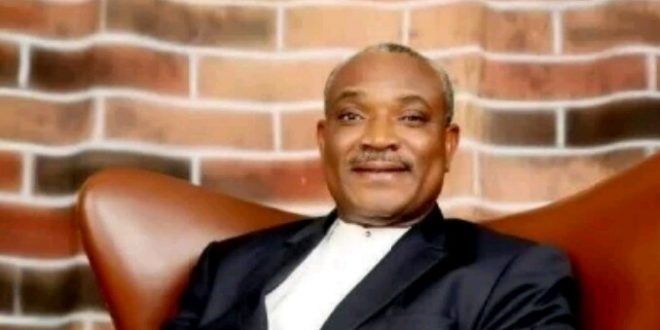 A week after being suspended from his post as Chairman of Special Investigation Panel on Recovery of Public Property, the Presidency has restored him to the post but with some changes to his operational guidelines.

The restoration of Obono-Obla, who is also Buhari’s Senior Special Assistant on Prosecution, to his post, followed last week’s meeting between him and Vice President Yemi Osinbajo a day after he was suspended by Attorney-General of the Federation and Minister of Justice, Abubakar Malami.

A top Presidential official confirmed to Vanguard last night that Buhari’s intervention and restoration of Obono-Obla to his post followed the explanations by Osinbajo after getting briefings from the presidential aide.

Obono-Obla to act on cases referred to him by Presidency, AGF

The source, however, said Obono-Obla would, henceforth, operate under the shadow of the Vice President, who would supervise the work of the Special Investigation Panel on the Recovery of Public Property.

“For Obono-Obla to operate effectively, he must bear in mind that he cannot go outside the scope of what is given to him either by the Presidency or the AGF and must abide by recovery issues referred to him by the two offices,” the source explained.

Asked whether he was sacked or suspended in the first place and what the offence was, the Presidency official, said: “I can confirm to you that Obono-Obla has not been sacked. The only thing that must be made clear to him is that he should not assume to be operating on his own but to subject himself to the directives of the AGF of the Presidency on whatever recovery he wants to embark on.”

It will be recalled that when Malami suspended Obono-Obla from his post last Sunday, he had accused him of running the presidential panel contrary to the Act establishing it.

Obono-Obla was notified of his suspension via a letter dated November 1 with file number, which was signed by the AGF.

In the letter marked HAGF/SH/2017/VOL/1/60, Malami maintained that activities of the panel contravened established administrative procedures and protocols in the nation’s civil service structure.

He warned Obono-Obla to strictly comply with FG’s directive that he should hands-off from further presiding over any activity in the name of the panel.

Obono-Obla was also barred from further granting press interviews without firstly securing permission to speak on any official matter.

Malami’s letter said, “Obla is also instructed to henceforth seek clearance from the AGF before granting any media interview or making press releases on official matters, while he is directed to promptly provide a detailed up-to-date report on the activities of the panel to the Minister for onward transmission to the Vice President, Professor Yemi Osinbajo.

The letter entitled, ‘RE: Directive In Respect of Chief Okoi Obono-Obla, Chairman of the Special Investigation Panel on the recovery of public property’, was said to be a follow-up to a previous letter from the Vice President, Prof. Yemi Osinbajo, SAN.

According to the statement, Malami’s letter to Obono-Obla read: “I have received a letter Ref. SH/OVP/DCOS/FMJ/0424 dated 20thOctober, 2017 in respect of the above subject from the Office of the Vice President.

“In the said letter, the Vice President expressed his concerns on the activities of the Special Investigation Panel on the Recovery of Public Property which runs contrary to the enabling Act establishing it. He also noted that the activities of the Panel run foul or contrary to established administrative procedures and protocols in the Federal Civil Service structure.

“In view of the foregoing coupled with the directives contained in the letter under reference, you are hereby directed to refrain from any further action or taking any step in your capacity as the Chairman of the Special Investigation Panel on the Recovery of Public Property with immediate effect until directed otherwise by His Excellency, the Vice President.

“While you are to await further instructions in respect of the Panel’s mandate, you are hereby directed to promptly provide a detailed up-to-date report on the activities of the Panel to the undersigned for onward transmission to the Vice President.

“Furthermore, you are required to henceforth seek clearance from the Honourable Attorney General of the Federation and Minister of Justice before granting any media interview or making press releases on official matters.