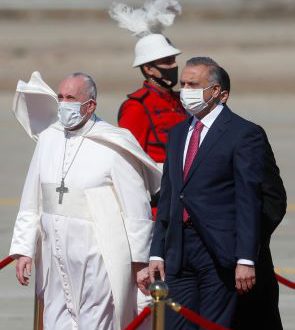 Pope Francis has landed in war-torn Iraq despite terrorism and Covid fears in a controversial and risky trip.

Francis’s four-day visit is his first international trip since the start of the pandemic and marks a return to the globe-trotting diplomacy — especially to minority-Christian countries — that had been his hallmark. It amounts to a show of encouragement for a nation trying to recover from the chaos of a U.S.-led invasion and the brutality of the Islamic State, a group that once vowed to “conquer Rome.”

The 84-year-old head of the Christian Catholic Church arrived in the country’s capital of Baghdad on an Alitalia flight today.

The trip will see the Pope Francis travel to four different cities in three days, including ISIS’ former stronghold in Mosul.

A massive security operation is in place to ensure the Pope’s safety after the country has been rocked by a spate of recent rockets and suicide bomb attacks.

Since the defeat of the Islamic State militants in 2017, Iraq has seen a greater degree of security, though violence persists, often in the form of rocket attacks by Iran-aligned militias on US targets, and military action in response.

His trip comes just two days after a US base was bombed in western Iraq.

He will say Mass at a Baghdad church, meet Iraq’s top Shi’ite Muslim cleric in the southern city of Najaf and travel north to Mosul, where the army had to empty the streets for security reasons last year for a visit by Iraq’s prime minister.

Charles Igbinidu is a Public Relations practitioner in Lagos, Nigeria
@https://twitter.com/ionigeria
Previous Married female teacher who had sex with a 15-year old pupil jailed for over 6 years
Next Revealed: Why Real Madrid appointed Ronaldo as Ambassador with €1m annual salary without a contract