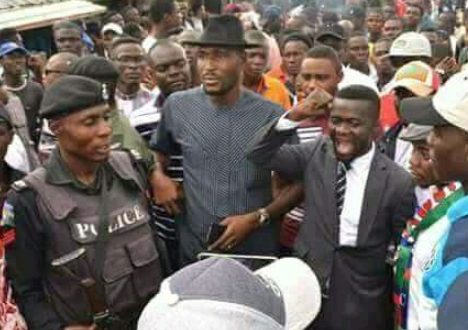 Political Aspirant Kidnapped In Bayelsa Ahead Of Defection To APC

A Youth mobilizer, and aspirant for Yenagoa constituency 2 in the state assembly, Hon. Bibi Oweifa was reportedly kidnapped by unknown gunmen yesterday, at the Bayelsa State secretariat Annex one.

According to Bayelsa journalist Bodmas, Oweifa’s kidnap is said to be coming hours before his intent defection alongside hundreds of his supporters, to the ruling All Progressives Congress (APC), scheduled for today, 21st July 2018.

Bibi, an indigene of Bumoundi, in Ekpetiama clan, Yenagoa local government area of the state, is reported to have been kidnapped at around 3:30 pm yesterday.

The gunmen were said to have invaded in military attires, overpowering his Personal Assistant out of the vehicle they were, as they made away with him.

It is now about 23 hours he has been in the captivity of the kidnappers..

Until his kidnap, he was the state Vice-chairman of the state peace and reconciliation committee.

On 11th July, Bibi Oweifa was endorsed by youths, elders and women of Gbarain/Ekpetiama, Yelga Constituency 2, as their sole candidate.